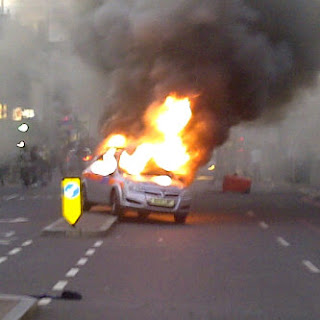 Riots ensue starting from Broadwater Farm
Budvar said…
If you shoot at plod, you can’t be surprised when bad things happen to you.

So another scumbag is taking a dirt nap, I wont be losing any sleep over it.

Maybe that’s what happened. It’s not clear. I wonder what the legal situation is, if that is correct. If you are right, I seems that the death penalty is already in use in Britain.

The dead man’s girlfriend, Semone Wilson, 29, said she had received a text message from him shortly before the shooting. “At about 6pm he sent out a message on his BlackBerry saying ‘The Feds are following me’, and that’s it. That’s the last time anyone heard from him.”
As the IPCC appealed for witnesses, conflicting accounts of the shooting emerged. One man told the London Evening Standard he had seen officers shoot a man on the ground. But others said a shot was fired from the cab before police returned fire.
The scene was visited by David Lammy, the MP for the area, who said: “I am shocked and deeply worried by this news. There is now a mood of anxiety in the local community but everyone must remain calm. It is encouraging that the Independent Police Complaints Commission has immediately taken over the investigation. There is a need to clarify the facts and to move quickly to allay fears.”
“It is very important that our community remains calm and allows the investigation to take its course.”
Jay Crowned, 39, who lives locally, last night described the dead man as “a local boy who was loved by the community”.
“The whole family is devastated,” she said, adding that he had been feeling down since a friend was killed this year.
“His friend was like a brother and he lost him brutally. Since then he’s been really down.”


A bus, a shop and two patrol cars have been set on fire in Tottenham. An estimated crowd of around 300 have gathered and there have been reports of looting and shop windows being smashed.
Earlier in the day members of a community where a young man was shot dead by police had took to the streets to demand “justice”.
The 29-year-old, named locally as father-of-four Mark Duggan, died at the scene in Tottenham, north London, on Thursday.
About 120 people marched from the local Broadwater Farm area to Tottenham Police Station, forcing officers to close the High Road and put traffic diversions in place.
A Metropolitan Police spokesman said: “Missiles were thrown at them. One was set alight and one was pushed into the middle of the High Road.”
Officers were being dispatched to disperse the crowd, he said.
He could not confirm that those responsible for the trouble were connected to the protest.
A family friend of Mr Duggan, who gave her name only as Nikki, 53, said the man’s friends and relatives had organised the protest because “something has to be done” and the marchers wanted “justice for the family.”
Some of those involved lay in the road to make their point, she said.
“They’re making their presence known because people are not happy,” she added. “This guy was not violent. Yes, he was involved in things but he was not an aggressive person. He had never hurt anyone.”
Mr Duggan had been travelling in a minicab on Thursday and was gunned down after an apparent exchange of fire.
A police officer’s radio was found to have a bullet lodged in it afterwards, suggesting they may have narrowly escaped being struck.
Officers had been attempting to carry out an arrest under the Trident operational command unit, which deals with gun crime in the black community, according to the Independent Police Complaints Commission (IPCC).
An IPCC spokesman said that at around 6.15pm on Thursday, officers from Trident, accompanied by officers from the Specialist Firearms Command (CO19), stopped a minicab to carry out an arrest.
“Shots were fired and a 29-year-old man, who was a passenger in the cab, died at the scene,” he said.
It is believed that two shots were fired by a firearms officer, equipped with a Heckler & Koch MP5 carbine.
A non-police issue handgun was recovered at the scene as well as the police radio.
“Both the radio and the handgun are being sent for expedited forensic tests,” the spokesman said.
“The exact sequence of events is subject to the IPCC investigation. A CO19 officer was taken to hospital as a precautionary measure but has since been discharged.”
Local MP David Lammy has called for calm, saying the community was anxious over what had happened.
A police officer, PC Keith Blakelock, was hacked to death in 1985 following a riot in Broadwater Farm from where the marchers set off this afternoon.