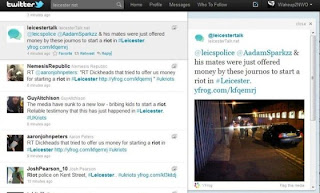 //Paul Joseph Watson
Infowars.com
Wednesday, August 10, 2011
As massive unrest plaguing the United Kingdom spread from London to other cities last night, claims emerged that individuals calling themselves journalists were offering to pay youths to start riots, suggesting an effort to provocateur some of the violence.
According to Tweets sent by people who were in the city of Leicester last night trying to secure their communities, kids were being told to cause mayhem in return for cash. Leicester was hit by violence later that night, as youths attacked buildings in the city center.

Fightback Dave has thrown his liberal streak out of the window as he struggles to redeem his reputation. Gone is the pledge to cut back CCTV, and then there was this particularly chilling gem:

“Mr Speaker, everyone watching these horrific actions will be stuck by how they were organised via social media. Free flow of information can be used for good. But it can also be used for ill. And when people are using social media for violence we need to stop them. So we are working with the Police, the intelligence services and industry to look at whether it would be right to stop people communicating via these websites and services when we know they are plotting violence, disorder and criminality. I have also asked the police if they need any other new powers.”