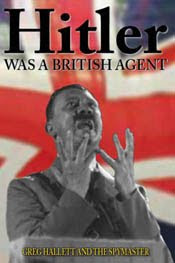 What do you make of Greg Hallett and his ‘Hitler revelations’?

It sounds likely he’s right but he’s not exactly a literary talent.

Was Hitler a British agent, as some people say? It does seem probable that Hitler and Bormann escaped from Berlin with the help of the British.

Greg Hallett may well be right about Hitler having been a British agent of some kind. Bormann is said to have been a Soviet agent. The Hess flight in 1941 must have been with the agreement of Hitler. The flight seems to have been part of the preparation for Barbarossa. Probably, Hitler wanted an undertaking that there would be no western front when he attacked the Soviet Union. If he did, he must have got it.

Hitler clearly believed that he had a special relationship with the British. If he thought that Germany’s friends in the British aristocracy still had the clout, he was wrong, because Victor Rothschild had the clout.

In spite of these friends, German intelligence in Britain had lost all its assets after the war started. On the other hand, the Germans were penetrated to the gills, plus they didn’t know about Enigma. Even the Abwehr chief Canaris worked for the British, so it’s difficult to see how the Germans could have won.

The Germans lost the war because their enemies had better intelligence services. Some people have gone further than that. Jim Condit has made a long video arguing convincingly that Nazism had a strong Jewish element in it. The Nazi state does resemble the Jewish state described at the end of the Protocols. Not many people know that Hitler was financed by the Warburgs from 1928, though he didn’t know it. Without their money his movement would have disappeared. He was also financed by Wall Street.

Then there is the extraordinary episode at Pasewalk in 1918 when Hitler was brainwashed in order to cure him of his psychosomatic blindness. The doctor transformed the corporal into the future fuhrer with a complete change of personality. It may not be going too far to say that Hitler was a sort of Manchurian candidate.

One way or another, Hitler’s ethnic cleansing of Jews made him the father of Israel, and Lenni Brenner has published many documents proving that during the 30s, the Zionists worked closely with the Nazis. Hitler was also used to force Stalin into an alliance with Roosevelt, in preparation for Bernie Baruch’s crazy 1946 plan to create a federation out of the USA and the USSR. Stalin smelt the coffee and declined, hence Churchill’s Iron Curtain speech.

Both sides were planning for war, and we now have a good idea of the objectives of both sides. The most instructive text to read about the inter-war period is ‘Red Symphony’. It’s on the internet and is a transcript of the NKVD interrogation of Christian Rakowsky, a Bulgarian Jew who was head of the Comintern. It casts fascinating light on Marx, Lenin, Trotsky and Stalin and their connection with the Rothschilds. Rakovsky’s analysis of the charlatan Marx is devastating and needs to be read by every ‘Marxist’.

Since Victor Rothschild and the Foreign Office were trying to push Hitler into a war with the errant ‘Bonapartist’, Stalin, who had usurped the bankers’ Crown Prince Trotsky, Rakovsky suggested that Stalin steer clear of trouble by signing a non-aggression pact with Hitler. Rakovsky thus avoided the firing squad. Hitler was certainly manipulated at many levels, but he never gave up his financial system which cut out the international bankers. It worked like magic on the German economy, while under Roosevelt seven million Americans secretly died of poverty, spun by the rhetoric of the ‘New Deal’ into oblivion.

Towards the end of the war, the Nazis thought that there was a prospect of the Americans and the British joining with them to push back the Red Army. Maybe Hitler, the British agent, had been dreaming of that all along. Instead, Eisenhower left one and a half million German POWs to die in open fields behind barbed wire. The true history of Nazism and Communism has yet to reach British bookshops.

PS One last question. If it took three years for the US military police to discover that there were no gas chambers in Germany, how can we be sure that there were any at Auschwitz, where there are no cyanide stains on the walls either?

4 Responses to “‘Hitler Was A British Spy’”