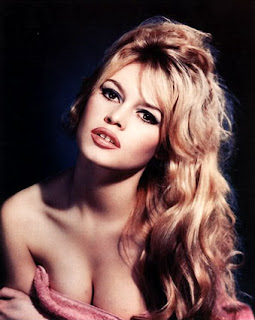 Remember Bardot?  Where have they all gone?

I’m under canvas in France.  Not bad in theory, but as so many people have arrived unexpectedly to join a family holiday, there’s no spare bed available, and for the first time in years I’m sleeping on the ground, well on a mat.  In fact I slept pretty well despite that, falling asleep as soon as it went dark at around 9 pm and woke at 5 am to realise I had forgotten to pack a towel.  I walked 2 miles into the nearest ville, and resuscitated on gulps of delicious French coffee and chocolat chaud with croissant.  I could tell how rough I must appear from the looks of concern I received from the other clients in the cafe.  They were all immaculate, as you would expect.

Oh well I am approaching my 57th birthday!   I’m sure that it’s not only my clothes, still on from yesterday, which appear somewhat crumpled!

I then checked in to the internet shop nearby, to see if anyone had been on The Tap, to find the comments under the previous post to this have stretched out to 30 odd,  all about them riots, as Britain nears total collapse!.  The regulars like Twig, Me, Gillian, Stuart and so on have been feeding in links from all over the place – as in this copy and paste job –

@Tapestry
A little off topic, but I thought this would be of interest to your readers. —&amp;amp;gt; David Icke
9:59 AM

//Igor Gois, a Brixton resident and deputy manager at neighbouring Phones4u, said: “The police are saying that it is the youths that are doing this. But it’s not; it’s big men.” (Streatham traders speak of riot drama) //

the globalist agent who broke through the CarpetRight store (3.03 video above) with martial arts moves was very stocky and powerful.

1:50 PM
I see that Britain is being prepared for martial law, with endless supposed riots out of

control, being beamed on TV news around the world.

The TV in the resuscitation ward where I enjoyed intravenous cafeine just now was streaming manufactured images of thuggery from Manchester.  No one was even looking at it apart from me as I stuggled to follow the commentary.  It all looks so artificial.  The French too it seems have given up listening.  That was the most encouraging thing.  No one believes the nonsense any more.  But as Alex Jones points out in the link above on infowars, martial law is bound to be the next game of darts.

Sorry about the lack of French chicks in the blogpost.  That’s the point.  There don’t seem to be any around here.  I thought I would share all my frustrations with my readers this morning, not simply the pôlitical ones.  If my girlfriend is reading this, I’m only joking, OK!

Shane is waiting for me in England (faithfully I hope), because, as usual, we couldn’t get a visa.

French keyboards are also a struggle, but at least as regards mastering their eccentricities,  it seems that I’ve succeeded.  If I succeed with the local chicks as well, then I will indeed be achieving the miraculous, unless I do something pretty dramatic to improve my appearance.  My son aged three, on the other hand, seems to be doing very well in that regard, with several queuing up for a kiss from him last night.  He is indeed the only one I can see having a riot!

I will report back tomorrow  – or ”a demain’ as they say ‘en France’.

One Response to “French Chicks And Keyboards”