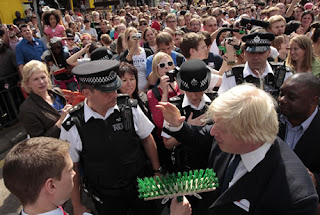 Guess what? Cameron has got his globalist “Supercop” Bill Bratton on the payroll, just as he wanted.

We so did not expect that at all after he was rejected by Theresa May.   The riots began after a peaceful vigil for a man shot by police in Tottenham for no good reason.  The vigil was then “hijacked by a small group of extremists” from outside the community.

“Thugs must be made to fear the police, says U.S. ‘supercop’ hired by Cameron”

Cameron seems to be quite an operator, overriding the common sense of Theresa May.  He has false flag technique worthy of a Bush.

Link etc from Me

14 Responses to “False Flag Cameron Gets His Man”