Click and listen.  Very moving.  He knows.  He was there.  He did what he did, and regrets it all. 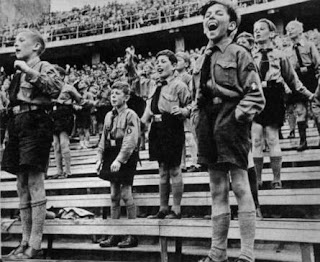 Hitler recruited every boy over 10.  Cameron wants every child over 16 to ‘volunteer’.

Here’s why things are this way.

This link tells the story from the Kennedy assassination onwards, including a section on how the US Boy Scouts are being used as a political force to suppress rebellion by returning veterans from the wars.  These are killing themselves in greater numbers every year, deprived of the psychological support they need to recover from PTSD.  Others are becoming politicised against the government’s war and debt programmes.

David Cameron wants to set up a new Youth Group in Britain in response to the recent riots.  The riots were of dubious provenance, and likely to have been a device for bringing in the features of a Totalitarian State into Britain, just as 911 was used in the States to introduce the Patriot Act and Homeland Security.

The world has seen such things before.  Why do people not recognise what is happening, until that is, they are sent off to war, when the scales fall from their eyes?