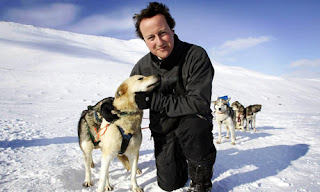 The bankers’ friend gets media protection at all times.

Speaking in the House of Commons Thursday, Prime Minister Cameron’s “explanation” for the outbreak of street disturbances across England demonstrates a total ignorance and poverty of understanding on his part of the nature of the breakdown in his society. He blames it on “criminality pure and simple” and “pockets of sickness” and “lack of individual morality and responsibility”.

This view is largely echoed in the British political establishment of all parties and the media.
The looting, thievery and lawlessness that Cameron so condemns is but the reflection at the street level of British society of what is taking place on a much greater scale at the upper echelons of government and the economy.
Despite the appearance of pinstripe suits and well-groomed accents, we can, if we are honest, see decades of looting and thievery of economic and financial resources by corporate elites aided and abetted by Labour and Conservative governments. The taxpayer bailout of corrupt banks initiated by Labour PM Gordon Brown and now overseen by Cameron, paid for in large part by austerity in public spending cuts, is but the latest manifestation of official robbing of the majority to swell the already outrageous wealth of the ruling elite class.
Cameron and his gang of plummy-accented thugs are gunning for $150 billion in public spending cuts to pay for the criminal enterprise known as British banking. This is racketeering that a street gang in London’s east end can only marvel at… and indeed, in a very real way, only emulate.
Combined with that looting by the elite we see the total lawlessness and criminality of British governments who have worked hand in glove with other criminal governments to launch wars of aggression (Nuremburg standard war crimes) in Afghanistan, Iraq, and now Libya, resulting in the deaths of over one million civilians. Where is individual responsibility for that mass murder and destruction Mr Cameron?
Finian Cunningham at Global Research.  He’s anti-capitalism, which is a shame, and sees the political debate as left versus right, whereas I see it as the people versus the elites that exploit them.  Capitalism would see the elite be made to compete with each other, instead of forming cartels out of every industry.  We currently have a secret version of communism, or state capitalism, rather than the real thing, which is barred by the operation of the elites.

John Redwood, who is a capitalist, gives some details of the looting actions being carried out against British taxpayers today as follows –

We want our money back from RBS: and why is RBS buying risky Euro sovereign bonds?

By JOHNREDWOOD | Published: AUGUST 14, 2011
I was against the state bailing out RBS lock, stock and derivative. I wanted the last government to preside over putting it into an orderly administration, where depositors and other  essential interests were protected. The rest should have suffered  losses to sort the mess out quickly. A managed administration could have avoided worse systemic damage than we experienced going the government’s way.
I wanted them to sell off the overseas banks, the Investment bank, the insurance company and the rest, and let the shareholders and the bondholders take the losses they deserved. Instead the Labour government decided to subsidise and prop the whole range of businesses trading under the RBS Group. The incoming government largely continued the previous government’s strategy.  The idea is to let the management sort the Group out, with only modest disposals, with a view to selling the state’s shareholdings at a profit in due course.
So how are they getting on at RBS? Last week the shares slumped to a new low of 24 pence, meaning we taxpayer enforced  shareholders at today’s prices  have lost more than half the money we  were made  to invest in the Group’s shares. Anyone who knows the history of UK nationalisation will not be surprised.
The Group produced its half yearly results recently.  These showed that the bank has done a good job complying with regulatory requirements to have much more cash and capital relative to its business activities, and to get its loans below the level of the deposits. I would say it needs to do no more to strengthen its balance sheet according to regulatory measurements. It has gone from a  Tier One Core Capital ratio of a too small 4% to an impressive 11.1%, and has moved from leverage of a mind blowing 28.7 times to a more conservative 17.8 times. Job done.
What is altogether more disturbing are the losses still being incurred, and some of the investment decisions being made.  In the first half the Group lost £678 million before tax. Those losses are largely down to the taxpayer to pay. No-one raises issues about them in the Commons apart from myself, and no-one seems to think they are avoidable. Yet those losses represent the excess of RBS spending and cost over its revenues. If it cannot get its revenues up it has to get its costs down.
In Quarter Two 2010 income was £396 million lower than Quarter Two 2010. Costs were only £211 million lower. That is not the way to bring a company into profit.  Core total income for the half year fell by £1177 million, whilst costs rose by £36 million.  The half year saw losses of £850 million on Payment Protection Insurance recognised, and £733 million losses on Greek sovereign debts. The management calls these “issues of the past”.
I can sympathise with them about the PPI. That is largely  down to previous managements. I hold the present management to account for the Greek sovereign debts. Why would anyone have held Greek debt over the last couple of years? Have they not been reading the warnings and hearing the alarms sounded like the rest of us? What part of Euro crisis and Greek bankruptcy – the Greek state’s inability to borrow in the normal way in the markets to pay its bills – did they not understand?  Why was a state bank still in Greek debt?
For that matter why did RBS increase its holdings of Italian debt to £955 million in time for the crisis in their bonds? And why was it adding a little to its Spanish debt position? Total debt securities are up by £12 billion on the quarter, and £26 billion over the half year.
Its portfolio of sovereign and financial bonds rose by 12% or £26 billion whilst its portfolio of loans and advances to customers fell 2% or £9.5 billion. It did meet its UK business lending target. It still holds £394 billion in derivatives and £95 billion in loans to other banks, compared to £545 billion of customer loans. It has a substantial US and European business on top of its UK business, and  a large investment bank.
I see no reason for UK taxpayers to be subsidising the losses of such a Group. The bank should be told to make more rapid progress with selling off its different businesses to cut risk and bring in cash. UK taxpayers should not be punting in Euro sovereign debts in the middle of such a crisis. It would be easy to cut the size of the RBS balance sheet, cut  the risks and get some cash back.
HARRY COLE adds –

What are the odds on David Cameron’s leadership amid UK riots?

Cameron has been awol for the first 48 hours of yet another crisis. If he fluffs it on the riots, it could be curtains.

Written by Harry Cole, UK Political Editor on 9 August 2011 at 10am

Betting on more violence in Lewisham
I’m not the only one breaking off from a holiday. The Prime Minister has just announced a recall of Parliament, making official what the political classes seem to have been painfully slow to understand: the riots represent a fully fledged national crisis.
A defining moment in his premiership, the decisions he makes in the next 24 hours could sink him or save him.
This is the second crisis in a row in which the Prime Minister has been awol for the first two days.
Just because Cameron is good on the ropes, it does not mean that he doesn’t need to think about strategy. If his only tactic is to fire fight problems as and when they arise, one day he’ll come unstuck.

Harry Cole was writing before Cameron’s triumphant return from holiday, and his instant ‘let’s get tough’ response.  What if that part of this theatre was also in the plan?  Cameron is a key asset of the One World Government, supporting all their wars, and allowing the banks and big business to impoverish the country.  You would expect them to be pulling stunts like this to make their man look like a ‘born leader’.  He’s taken a few hits over Hackgate, and needed this to restore the shiny exterior.  It’s win-win as far as the authoritarian war-debt elite are concerned.

As reported by Charles Moore in the Telegraph on Saturday, apparently Liberty (the “human rights” pressure group) were invited to sit in on the Met’s Control Room to monitor previous demonstrations, such as the Cuts and Student Riots. Presumably the failure of the Met to control the widespread disruption and destruction on those two occasions had something to do with Liberty’s objections to kettling.
In the same paper, in a piece by Cassandra Jardine who interviewed Maurice Reeves, of the furniture store burnt out on Monday, Mr Reeves was told by a police officer that they were under instructions on the Monday evening NOT to arrest or break up the mobs in case they inflamed racial tensions.
It certainly looked like deliberate non-intervention, or, some would say, dereliction of duty.
Mmmmmmmm………..or even theatrical planning.
The Tap Blog is a collective of like-minded researchers and writers who’ve joined forces to distribute information and voice opinions avoided by the world’s media.