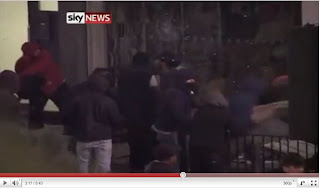 left of picture from Sky News, the rioter about to smash a window with a chair is clearly white-skinned.
FROM GILLIAN EMAIL  –
In the unlikely event that you haven’t seen this yet!  This is in tomorrow’s Guardian, under the above mentioned title.
“Initial ballistics test suggest bullet lodged in officer’s radio during incident in Tottenham was police issue”
In other words, to me at least, this suggests that the victim Duggan was either not armed or at least did not fire a shot.


as usual the saboteurs were masked


Maybe so.  But only if the killing of Mark Duggard was deliberately carried out as it was to bring on the riots.


It may be right to speculate as to what is going on in this way.


I would prefer to look back on these events in a few weeks time, and see if any more information comes out which sheds light in the meantime.


In a country where the government is prepared to blow up the Underground and kill 50 and maim hundreds, anything is clearly possible.  But let’s wait and see.  This could be cock-up equally as conspiracy.


Intended to be a peaceful vigil

“The Metropolitan police has admitted it “had not anticipated” the extreme violence that saw police attacked and buildings and vehicles set alight during sustained rioting in Tottenham, north London.

As questions were asked about the level of policing, Commander Adrian Hanstock said a peaceful vigil by the family of 29-year-old Mark Duggan, who was fatally shot by officers in the area on Thursday, had been “hijacked by mindless thugs” and that the situation had “escalated out of all proportion”.


Me said…
Read a comment on a forum – Sky News witness – so this is unsubstantiated.

Apparently Sky news claimed the two torched Police cars were first “hotwired” by thieves then driven to the high street where they were burned, by the same thieves.

That seems all rather convenient. They’ve obviously learned they can’t just leave police cars there without people thinking they’ve done it on purpose. So this time “thieves” did it.

the saboteurs were masked.

… but were unknown to the community.

they posed for photos

… but didn’t want their faces seen.

this comes at a time when the Bilderberg puppet globalist Cameron just happens to be seeking to appoint a “zero-tolerance” American policeman to be the new Met Police commissioner.

all very convenient if you ask… me.

BTW it’s not Jay Crowned! The name of the 29 year old who died was Mark Duggard.


Ooops!  blogging from an all day party.  Apologies.  Now corrected.

Don’t forget the police radio proves Duggard shot first: has anyone seen it? Can a police radio really stop a bullet or was this added to spice up the narrative?

Here’s a white guy (red hoodie, on the left) holding a chair about to smash a window

so far the black dudes seem to be peacefully walking about, albeit probably about to steal stuff from the shop. as the police has admitted it may be those (whites) from outside the community who are committing the violence.yet there are so many people willing to play the race card and blame black people. this is another lesson how the globalists divide and rule you.

I’ve linked these riots to Theresa May’s refusal to appoint Cameron’s American “SuperCop” from the start. Now I read this. alllll staged.

As it happens, I had written a few days previously that there was one outstanding candidate whom the Government should hire as the new Commissioner.
He is Bill Bratton, the genius American police chief who transformed policing when he halved New York’s murder rate and cut violent crime by half in Los Angeles.
It turns out that this was precisely who the Prime Minister had in mind. According to newspaper reports, Downing Street informally sounded out Bratton to see if he would be interested — and he was.
But remarkably, it appears Home Secretary Theresa May spiked Mr Cameron’s guns when the Home Office — which appoints the Met Commissioner in consultation with the Mayor of London — issued an advertisement for the post specifying ‘applicants must be British citizens’.
In normal circumstances, it would rightly be considered essential that a British citizen should run Britain’s most important police force. But current circumstances are far from normal.
There is a profound crisis in policing that goes far beyond the Met. It is not an exaggeration to say that — with honourable exceptions — the very ethic of policing in Britain has been systematically dismantled.

The following is a quote from Inspector Gadget’s Police Inspector Blog.  Often worth a read imo.
He writes:  “I SERIOUSLY hope the Guardian is wrong, or else we have all been badly stitched up by the IPCC’s
initial statement.  If it turns out Duggan wasn’t armed and didn’t shoot I think I’ll riot myself!! “
For those not familiar with the Police Inspector Blog, I can tell you that he is a serving Police Inspector, based in what
he refers to as Ruralshire.  It can’t be far from London though because he is often in the thick of it in London and was
earlier today in Croydon.
Gillian