A mere footnote to an article on the Virginia 5.8 quake reads as follows –

On Monday night, a quake struck in Colorado, far from any cities. It registered as a 5.3 and was the largest to hit the state in over a century, but barely merited a headline. Or, indeed, a tweet.

I’m sure Tap readers will let me know if they hear of any more Dutchsinse interviews landing on the net. We’ll be watching out for his next report.

The next quake might be coming from next door to Colorado, at Jackson Hole, on Friday night in the State of Wyoming, where Bernanke will be making his keynote speech for the Fed. Will he be announcing QE3 or not? If he doesn’t, markets will no doubt take the cue and fall precipitously.

Maybe Yellowstone will erupt at the same moment. There seems to be a plan to cause environmental and financial panicon the grand scale, judging by what we can see, on all fronts. This time the elites, who make fortunes out of financial crashes, might actually succeed in getting one going. 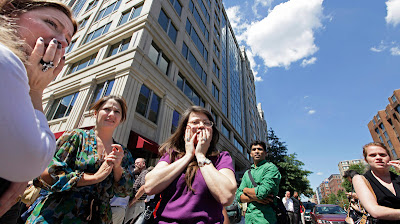 The fear factor is rising across the USA as these bizarre geological events unfold. Pictured Downtown Washington DC after the very rare earthquake two days ago.