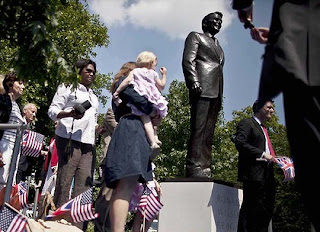 Reagan’s statue unveiled in London this week on July 4th.  Was he really the President everyone keeps saying he was?

This clip shows an interview with a military staff officer who sees that the old democratic american republic is dying, and the US has become a national security state.  The US is already involved in 4 wars, he says, and could soon be involved in 4 more.  No one did more to destroy the traditional democratic US state than the hero whose statue has been erected in London this week – Ronald Raygun.

Such a good actor, most still have no idea what he was really about twenty years later, preferring to wallow in  dewy-eyed nostalgia than acknowledge the reality of what has happened to the USA since his Presidency.

The fellow in the clip  fought for the US in Vietnam, and then became an academic, is well qualified to explain the kind of President he was.  Of the inner circle that controls America he says,’They love war,’ and it was Raygun who ensured the military-industrial complex got control of the country, finally after decades of their trying.

(…although the Bushes tried to assassinate him. maybe he tried to resist and the n realised the futility of doing so)