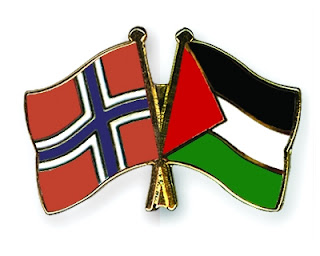 Norway declares support for Palestine’s desire to be recognised by the UN only four days ago.  The country is attacked today.  It could be cause and effect.  The OWG doesn’t want Palestine succeeding in its aspirations.  That is for sure.

REUTERS ARTICLE –   Norway, host of the 1993 Palestinian-Israeli peace accords, said on Monday it was “perfectly legitimate” for Palestinians to take their case for statehood to the United Nations for voting in September.

“We will consider very carefully the proposed text that’s to be put forward by the Palestinians in the coming weeks,” said Norwegian Foreign Minister Jonas Gahr Stoere, with Palestinian President Mahmoud Abbas beside him at a press conference.
“Norway believes it is perfectly legitimate for the Palestinian president to turn to the United Nations with such proposals,” Stoere said, adding that continued negotiations with Israel will be required in any case.
The United States and Israel have opposed Abbas’s plan, backed by the Arab League, to bring the Palestinians’ long quest for statehood to a vote in New York.
Abbas said on Monday the plan was still on.
“We will seek to go to the U.N. next September in order to obtain membership for the state of Palestine,” he said.
He added: “Our way is to go to the Security Council. If we fail we will go to the General Assembly.”
Norwegian diplomats said U.N. membership would require approval by the Security Council, where the United States holds veto power, but that a resolution on statehood could go straight to the U.N. General Assembly.
Stoere said Norway would decide how to vote after reading the exact proposal but left little doubt about his inclination.
“I don’t think that any Palestinians or anybody around the world are in doubt that Norway supports Palestinians’ right to statehood,” he said. 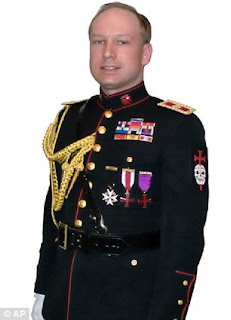 the death robot wearing masonic emblems.
was he acting under mind control, doing as instructed by his controllers?
TAP – That aside a bit of false flag terror all helps to keep people afraid and more likely to agree to an invasion of LIbya, for example.
They took the killer alive on the island where the Labor Party Youth Camp was taking place, but do we hear anything about who he is yet?  No – just bald statements of who is politically responsible without connecting the guman to anyone or anything?  Why not work out he is first?

As the gunman carried on shooting at will, a police special weapons and tactics team finally landed on the island and took the killer alive.  They are saying it more like Norway’s oklahoma city bombing than 911 or 7/7.
Let’s watch out to see if more about his identity is given clearly or cryptically.  He is said to be Norwegian.  That’s it.

A gunman wearing police uniform opened fire on campers on the tiny island of Utoeya, sowing panic among them, before finally being arrested.   Was he a policeman, as well as being in a policeman’s uniform?  Why risk taking him alive?
The gunman, Anders Behring Breivik, was a former member of Labour’s opposition [youth] party, Fremskrittspartiet.
Talking with a couple of friends in Norway this morning. It seems that the suspect has previous as far as attempting this sort of behaviour is concerned. He has previously been arrested when he was caught with fake police uniforms, explosives and an uzi but he was only charged with a minor offence and left to do his thing.
A lot of people in Norway are getting angry hearing that he was under suspicion but still managed to get away with this.

by Richard Tyndall July 23rd, 2011 at 09:09
Remember the same thing with 7/7 and 911.  The people were previously known to the Police but somehow magically evaded arrest or capture.
I think the Norwegians will be asking some pointed questions this morning about the Helicopter pics of the nutter in action, why were there no police or military choppers landing..  (Comment on Politicalbetting)
….or taking him out from the air?

Those who know the details of 7/7 and 911 will know that the terror acts accompanied exercises held on the same day, envisaging the exact events that took place, more or less.  In Norway there was also a bombing exercise just 48 hours before the attack came in.   The exercise was not notified to the public and shocked many people with its loud bangs and gunfire.  Anyone who has read the details of earlier false flag attacks would know this meant a real attack could well be being planned.
EXTRACT – The exercise occurred on Wednesday and revolved around anti-terror units attacking a disused building at the edge of Bjørvika pier with bombs and firearms.
“The men lowered themselves down from the roof and in through the window that had just been blown out, while they fired hand their weapons,” states the report, noting that the exercise was “dramatic,” produced “violent bangs,” and was watched by spectators at the nearby Opera House.
A video of the drill that accompanies the story shows police scaling the side of a building with an explosion going off below them before they enter the window and start firing.
Police had to publicly apologize today for not informing the public about the exercise.
Although it’s too early to judge the nature of this exercise, the fallback of a drill, which gives the state an excuse should any evidence of complicity in the real attack emerge, has been evident in previous major terror events, including both 7/7 and 9/11.
In the case of the London bombings, a consultancy agency with government and police connections was running an exercise for an unnamed company that revolved around the London Underground being bombed at the exact same times and locations as happened in real life on the morning of July 7th, a “coincidence” many skeptics of the official story have dismissed as a statistical impossibility.
If I was a Norwegian I would need to understand that my own country’s security services were behind this attack, just as we in Britain have to take on board that Blair probably knew all about 7/7 and the killing of people on British trains and buses.
FROM DEREK –
http://video.google.com/videoplay?docid=264709845600167246
AND FROM BRASSCHECK TV –
http://www.brasschecktv.com/videos/government-corruption/the-poisoning-of-americas-soul.html
The Tap Blog is a collective of like-minded researchers and writers who’ve joined forces to distribute information and voice opinions avoided by the world’s media.

6 Responses to “Norway Brings OWG Anger Down On Her Head”