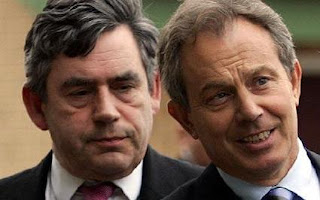 The endless feuding between Blair and Brown has opened up a gap for Ed Miliband to establish his authority.

It was known many years ago that Murdoch was dictating Blair’s policies.  Lance Price writing in his Spin Doctor’s Diary, said that he was told that no policy on the EU could be changed without referring first to Rupert Murdoch.  Today he’s in the Mail On Sunday repeating what he wrote.  No one seemed to notice before, and maybe now again, the public will prefer not to face the reality that Britain has no government, and that our democracy is a farce.  Our Prime Ministers are selected and manouevred into power by a worldwide elite, who have a worldwide political agenda.  Murdoch is their primary agent in Britain, but by no means their only one.  The BBC is just as guilty of carrying out the wishes of the global elite, and supporting their chosen ones into power. 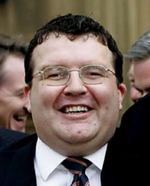 The battle lines are drawing, and the rebellion is gathering steam, but where will the momentum go?  The attack on Murdoch originated from Tom Watson, who pressed home his revelations about News International hacking practices, and police-paying for stories.  He was acting with the encouragement of ex-Prime Minister Brown, who is sore at not being offered a plum job in the IMF.  He sees Blair scooping all the honours, and is bitter also at his replacement in 10 Downing St by Cameron and Clegg.  He wants revenge.  What better way to achieve that than to hurt the power structure that has pushed him into the wilderness – Blair and Murdoch, who switched his support from Labour to Cameron.

MoS – “Tony Blair urged Gordon Brown to persuade the Labour MP who led the campaign to expose News of the World phone-hacking to back off, friends of Mr Brown said last night. Well-placed sources said Mr Blair, who has close links with the paper’s owner Rupert Murdoch, wanted Mr Brown to get his ally Tom Watson to lay off the News International (NI) title, but Mr Brown refused.” – Mail on Sunday

Brown might be offered some kind of job to try to contain his ambition and his vengefulness.  That is hardly an issue, but it would help draw the poison out of the situation.  Murdoch can feel relaxed that the Conservative Party under Cameron is sold out to Murdoch as surely as was Labour under Blair.  The Liberal Democrats are owned by the EU, and will be unlikely to bite the hand that feeds them too hard.

The problem for Murdoch now is that Ed Miliband is riding high in the polls at 44, eclipsing the coalition, and is in position to win an election with a landslide.

The question is whether Miliband can delay the takeover of BskyB by Murdoch, and break his power to get his hands on yet more media inside the UK, and whether he can keep control of the Labour Party and win power himself despite directly taking on the kingmaker of British politics.

All eyes are on Cameron, but he is not the battleground here.  He is well onside with Murdoch and will not dare to reduce his power and status within Britain.  Miliband may succeed in making a temporary alliance with the Lib Dems while the brouhaha carries on, but when the dust settles, the Lib Dems will side with Cameron in favour of Murdoch, despite any rhetoric they may offer now.  The only man who can actually change the situation is that rather geeky and goofy, much-ridiculed and discounted lesser Miliband, Ed.  I wish him every good fortune, if he dares to challenge the ‘system’ that has brought Britain to our current provincial status within the One World Government.  He is the only ‘unknown’ in this very messy situation, and possibly will try to undermine the power structure that holds this country in its sway. 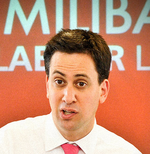 Sunday Telegraph – “The Labour leader is confident of splitting off some Liberal Democrat and Tory MPs for the vote, to be held on Wednesday, in a move which significantly raises the stakes in the crisis. The vote will be held on one of the days in which the Opposition sets the business of the Commons – meaning that even if Labour wins ministers do not have to act on the result. However, senior party sources say that if the Commons were to send such a powerful message, David Cameron would have little choice but to accept the will of MPs.” – Sunday Telegraph

Tim Montgomerie – Ed Miliband has consolidated his position in the Labour Party. Labour supporters have enjoyed his ferocious attacks on Murdoch and Cameron in recent days.

I suspect that whoever the faces in play, and whatever tactics are being employed, the real story about Murdoch’s bringing down a peg, has more to do with One World Government events than mere national and British ones.  This is not a battle between left and right, as some would have you believe, but between the global warming Al Gore/BBC/Guardian wing of the OWG, and the Bush/Murdoch/Blair/Cameron war-making wing.  The warmists have seen their status lowered as the world’s weather has moved into a cooler phase, and the sun’s activity is not cooperating with their political programme.


The militarists, on the other hand, have been surging ahead with wars in four countries already in process, with four more in the pipeline.   6000 weaponed drones circle the globe delivering their payloads regardless of national sovereignty, or permissions from Congress. The hacking scandal is a way to even up the power balance somewhat, and keep the Bush/Obama/Rockefeller/Kissinger high command in check.


The environmentalists just as surely want to deliver death and mayhem into our midst, believing that humanity is the problem and not the solution.  They want to achieve power more subtly, quietly poisoning populations, and reducing our numbers through chemical means.  Each group of the NWO is as evil as the other.  I’m sure Gordon Brown will have plenty more ammo for stirring the pot, if he finds his requirements for inclusion in the elite are not met.  He’s not the type to wander off and accept a happy retirement by the sea at Kirkcaldy.