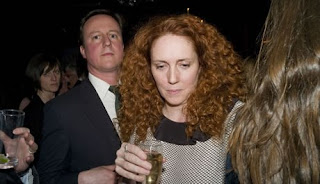 Anyone watching Rupert and James Murdoch’s performance yesterday, and Rebekah Brooks would have to admit they held up well under questioning.  But it was no more than you would expect from a professional crook in a police cell, used to playing the game of denial of what he does for a living.

The pie stunt which was definitely pre-arranged, with a suited minder guiding the pie throwing team to their target,  no subsequent investigation carried out, and with eye witnesses offering information rejected by Police and journalists.  News management is Murdoch’s business.  The shaving foam pie was a brilliant demonstration of the craft….except it’s been rumbled.

No one will change their minds as to the unsuitability of having our country run by a newspaper proprietor, who can select his chosen politicians and ensure they win power, demanding payback favours, and the maintenance of privileged monopolies over football TV worldwide.  The Empire is maintained by evil practices which have corrupted the Police all the way to the very top, and many other of our national institutions.

David Cameron had an opportunity to break with the ‘system’ he inherited from Gordon Brown, but he chose to go along the same path, of seeing the Murdoch alliance as more important than the views and needs of voters.  Behind Murdoch lies a whole raft of other cartels, eager to get their way in Britain, oil, pharmaceuticals, agribusiness and banks to name just four.  Ed Miliband wants to break with the system of selling out to Murdoch and giant corporations, it seems.  This is leaving David Cameron high and dry, as the public is crying out for an end to the destruction of our democratic processes by creeping corruption.

Ed Miliband will be the focus of increasingly bitter attacks from hereon in the media and no doubt elsewhere as big money tries to dislodge him.  But the more the public sees the likes of the Murdochs in public lying as professionally and brilliantly as I have ever seen it done, they will not be impressed.  Let’s hope that the rush away from the selling out of our democracy to big money continues to surge.  In that tide, Cameron will not be able to recover his former position.

He’s welched on his own supporters over the big issues.  He’s seen his Liberal Democrat partners decimated.  Now his media structure is crashing around his ankles.  The public are onto him.  The shiny shell that won over enough votes to get rid of Gordon Brown, and seize 10 Downing St only last year is well and truly cracked.

If Cameron falls, the Murdoch’s Empire, based heavily on its British football TV worldwide monopoly is in trouble.  The newspapers and the TV channels are as much instruments of control as of money-making.  The football TV rights are the golden goose, which the Murdochs will be desperate to protect, and why they want to get their people into power and keep them there.  Labour are getting into position to unpick this evil structure that is dismantling our institutions one by one.  Even people like me might end up voting for that, and I’ve been either a UKIP or a Conservative all my life.  Either way Cameron will be decimated.

The Conservatives will only stand a chance if they also get into the cartel-killing game, but it’s really not their bag.  The Conservatives are owned by the bankers all the way to the top.  Unless they get on equal terms with UKIP, and get fully eurosceptic,  the party is finally done for.   People will not continue voting for the party of big money, once their own pockets are being systematically emptied.  Conservative MPs must act and get rid of the unfortunate regime they now are locked in with, or be slung out in droves at the next election.  If they can’t see it now, they never will. 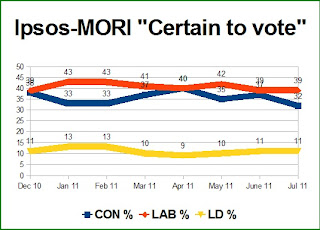 via www.politicalbetting.com
The Tap Blog is a collective of like-minded researchers and writers who’ve joined forces to distribute information and voice opinions avoided by the world’s media.