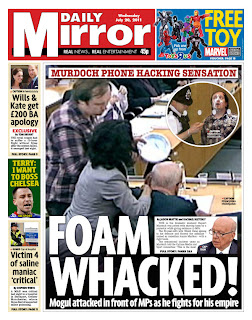 Today’s MSM ignore eyewitness accounts that Jonnie was being ‘managed’ by a suit.  His own description of how he got the foam in sounds unlikely to say the least.  Shaving foam in his bag between two plates lasting eight hours seems less than likely.  It fades away after ten minutes when you don’t use it.

If someone paid an unemployed comic 20 Grand for a harmless attack, would he do it………….?


TWITTER – Culprit throws a plate of cream in Rupert Murdoch’s face then says *quietly* “you naughty billionaire”. Wendi hit back even harder!


It seems odd that UKUncut’s Jonnie Marbles gets in carrying a plate full of shaving cream, and can approach Murdochs unchallenged, dressed in scruff.

Left-wing prick @AlecBaldwin has been the first Hollywood liberal to claim that Rupert Murdoch staged UKUncut’s assault. #30Cock
Shaving foam pie man had been arrested for Fortnum&Mason invasion- they were all let off y/day. Sending the wrong signals (h/t @MrHarryCole)
How did anarchist comedian get so close, dressed in casuals, obviously not a suit?  Very odd.  News is leaping all over it in triumph worldwide.  The whole details of the select committee are drowned out.  Media narrative is same on all channels as if they were ready for this.  Glass in Parliament.  Pro-Hunt invasion of Commons, etc etc etc.
Masterful news management.
TheTapBlog Tapestry
@
@23duff @HarryLangford How the hell did a scruff like that get right up to Murdoch sitting at the front equipped with plate of foam?
23duff Ryan D
@TheTapBlog @harrylangford Good old Met Police!!
ADLOYADA – Why didn’t Police investigators not want to know anything from a daylong witness of Jonnie’s movements?
I told the policeman steering us out that the girlfriend had been with May-Bowles all day, and they pulled her back. I also tried to tell one policeman after another that I’d spent the day sitting alongside them, that there was a group of four of them, and another, smartly dressed man who appeared to have been involved with them and organizing them, but they weren’t interested. Just wanted us all out.
I told Nick Robinson. I told Nick Davies. I told as many of the other journos I could see what I knew. You should tell the police, they said. But they don’t want to know, I said. I went back and had another try. No dice. The police just wanted the public out of the area. I went into the room where the journos where being allowed to wait to re-enter the meeting– the public were excluded after the attack.
And there was Mr Ginger, who hadn’t been in the Select Committee Hearing. I pointed him out to a couple of the journos I told the story to. Too busy. And then I went home.

See her whole piece – My Day Alongside Murdoch’s Pie Chucker.  It is most revealing.  Jonnie was being accompanied by a team of four, including his girlfriend who later claimed on Twitter she was dumping him over it.  The four were being shepherded around by a ‘suit’.

So who was the suit controlling the pie chucking team?
And why did no one want any information, either Police or journalists?

I think we know the answer to that.  It was yet another Murdoch-supported false flag attack.  Prince Charles’ car.  7/7.  9/11.  The list is endless.  The Police were in on it.  Some  journalists were in on it, but not all.  One tried to ask questions and was arrested, and had his Parliamentary Pass removed.

Our country is completely taken over by falseness.  Nothing is what we are told it is.

In Jonnie’s own words afterwards –

To be honest, I had not expected to get so far, but parliamentary security, with its machine-gun toting cops and scatter X-rays, is apparently no match for a man with some shaving-foam covered plates in his bag.

We know he queued outside for hours with others.  Do you really believe him that shaving foam in a bag would stay in condition and in place for maybe eight hours?  Unlikely.  More probable he was kitted out by someone inside and he prepared his delivery a few minutes ahead of dumping it in Murdoch’s face. 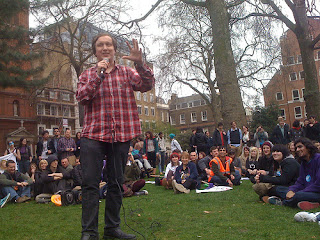 jonnie marbles
GUIDO COMMENTS TODAY 20th July –
Tell it like it really is says:
July 20, 2011 at 12:31 pm
Things the bbc don’t reveal:
Newsnight commissioned a film on UK Uncut in January and the starring role was take by Johnny Marbles – the pie thrower from yesterday.
Yet again selective reporting from the bbc.
9
0
Reply