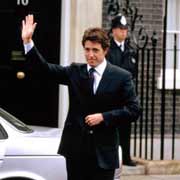 Hugh Grant as Prime Minister in Love Actually – the position he is now helping to protect in real life.

The best way to face off political opposition is to lead it yourself.  Those were Lenin’s words, and today you might wonder if you are witnessing a brilliant use of this strategy being carried out to defend those made vulnerable by Gordon Brown and his henchmen’s revelations about hacking.

The organisation ‘Hacked Off’ has sprung up as if from nowhere.  It looks well-funded and professional.  Its posters are allowed to be attached to public property without the Police insisting they be moved, as happens to most political campaigners.  Their political props include well-made Spitting Images of Murdoch, Cameron and Hunt, arrayed as puppets and puppeteer.  Things like that are not cheap or easy to make in 24 hours.  They make great photos for news coverage.  There is money being spent, and there has been a period of advance preparation.  This is not a grass roots spontaneous affair.  You can smell it. 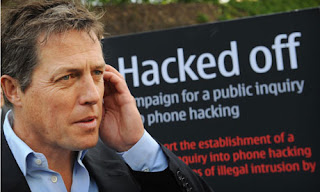 Into the studios walks one of Britain’s greatest actors,  his lines perfectly written and prepared, confident in his delivery, and being treated with all seriousness as a person qualified to enter a complex political debate.  He once acted as the British Prime Minister in Love Actually, possibly a movie version of Blair, or at least ‘inspired by’, and was no less convincing.  His name Hugh Grant.

It is of course quite possible that he hasn’t been hired for this role at all, and he decided spontaneously to appear in this capacity all by himself.  Yet knowing how the media works, this seems unlikely.  He might have had a minimal exposure in that case, not the throwing open of every door of all the television studios.

The way he was humiliated by exposing his dalliance with a black prostitute on Sunset Boulevard ten years ago, had political ‘play’ written all over it.  He wouldn’t be the first famous person to do things like that, but normally the media protects its icons as their investments.  The people who control who lives as stars and who dies off, had decided to nail him beforehand.  You can be sure.   He was getting too big and was not willing to get involved with their game plans at that time.  He had all he wanted. Why did he need ‘them’?

No – it was them that needed him to start considering a new role, to become a part of their programme of social control.  He was the biggest star on the screen, and they control Hollywood, and direct peoples’ careers.  His career was hit for six, out of nowhere, and he’s been given bit parts for ten long years.  After seeing how the ‘treatment’ works, he is now more willing to do their bidding.  He wants to be allowed back into the game.  His moment of opportunity has arrived.

Cameron must be protected at all costs.  If he falls, the whole support structure that keeps Britain in all the wars, inside the EU, bailing out the Euro, delivering the programmes of the UN,  ensuring the corporations get their way on all the key issues like the NHS, could fall apart.  Murdoch’s own position is also heavily dependent on David Cameron, the man he helped into power by dropping Gordon Brown two years ahead of the election.  Cameron must be protected.  The Lib Dem vote has been decimated.  The Conservative vote is likely to be fragile from hereon, with many supporters feeling cheated and let down by Cameron’s false promises.  If Humpty Dumpty falls, the pieces will not be easy to reassemble.

The narrative decided upon is to channel the whole attack onto one spot – to hit Murdoch – if only hardish, and for a while.  Instead of Murdoch setting on victims, he’s agreed to play the victim for a while to protect the real vulnerability of the One World Government’s position in Britain.  And, as all politicians know, the best way to create and control a battle is to control both sides.  They have to ensure the public’s attention is pulled inexorably away from Cameron, who would be finished if this scandal were to fall heavily onto him, and to keep people talking, first about the News Of The World, whose false closure was played out with full unnecessary drama, and then on BskyB which can be fixed somehow down the track, if first it is placed into the long grass.  Then they will find new daily distractions to extend the story.  The Coulson aspect, and any other embarrassing details like the recent death of Christopher Shale must not be featured.

The organisation Hacked Off, and Hugh Grant are playing this narrative to perfection, using their skills and resources to keep the attention mostly on Murdoch.  Charm ouses from the TV screen.  People are hooked. Lenin would be proud.

7 Responses to “‘Hacked Off’ Hugh Grant Stars In Murdoch Horror”