Whatever the Murdochs may have done or not done in the realm of phone hacking, pales into insignificance alongside the greatest evil being committed in Britain today – the secret seizure of children by the state.   There are now more than 10,000 kids taken from their families every year – not far off 1 in 50 children are being seized. (Read Christopher Booker – Sunday Telegraph)


The facts of this case speak for themselves.  Please support the victims here by signing the petition, joining the Facebook group and spreading the word.  The world must know.


If you can get down to so-called Royal Court Of Justice in The Strand on Monday 25th July 2011 and show your support.

Above all, copy and paste this immediately to as many blogs as you can.  Thanks.  The MSM is of course 100% gagged.  That’s the only reason it’s happening, because of total secrecy.  End it. 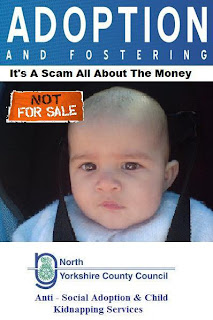 Guido this morning under http://order-order.com/2011/07/22/goldsmiths-non-denial-denial/

Tapestry says:
July 22, 2011 at 9:54 am
This story compromises them all,
but it’s gagged.
Get down The Royal Court Of – what they optimistically call – Justice on Monday in The Strand. This needs a large mob to shout the bastards down.
3
0
Reply

Original blogpost about this case


It’s all go in the Vicky Haigh case

Posted on July 17, 2011 by Sabine Kurjo McNeill
Advocating The Rule of Law in the Public Interest:
Doncaster MBC
FAO: ‘il’legal and ‘un’democratic dept
FORMAL URGENT NOTICE
There is no lawful justification for secret hearings in the courts, and speaking from my own first-hand experience, they are having an adverse affect on my daughter and me.
I believe these secret courts are illegal and by going along with it means that I am in contempt of court.   How can I be expected to betray my daughter by attending a secret hearing which is acting totally against her welfare and best interests? By doing so, I am agreeing to protect paedophiles and attacking the innocent like my daughter and me:  do not ever ask me to do this again!
I will be at the court on the 25th July, but I will not go in unless my fellow citizens come in with me, and witness in open court, the entire Proceedings which are clearly in the Public Interest.  The Public are the only truly independent and  qualified stewards and peers who are fit to give due regard to the destiny of my daughter and myself (and all others like us).
The Courts are OUR COURTS, the people’s courts, that we all pay for.  I will not let my daughter down any more and the Public need to see how you twist, collude and confuse the course of Justice.  Not just this, but how you wickedly meddle and wreck people’s lives, through your criminal interference.
My daughter needs me to rescue her and I cannot do that whilst you are fixing hearings out of sight of Public Interest. I will not betray my own flesh and blood. I will not play on your terms any more.  I have witnessed with horror how you distort the Truth for your own money- and power-driven agenda.
I require no less than full and open disclosure, nothing to hide, no dark secrets, no obfuscation, no concealment of evidence, no deflection from Truth. I now insist that you all show your face and your ways to the world. Let the world see what you are up to and be assured that they will be as disgusted with you charlatans as I am.
Child protection? Let the world decide whether you are protecting children or using them as commodities for your sick jobs and letting them be exposed to dangerous individuals. Let the world decide, if you are abusing your power which is totally illegal in our democratic society.
Your undercover crimes will be tolerated no more. You need the light of day to shine into your faces and let’s see you wither and die – and fade away to oblivion.
You have made money from my daughter for years and you have failed to protect her and what’s more have FED HER TO THE LIONS.  You have recklessly exposed her to a paedophile or paedophiles and gone out of your way to subvert the facts on this case. Not only have you placed her in an unsafe environment and frightened her little soul repeatedly, but at the same time destroyed my daughter’s right to her family life. WHO DO YOU ALL THINK YOU ARE?
There will be a riot caused from this, if you do not right your wrongs. Give me back my daughter whom you have stolen in broad daylight, by trickery and unlawfulness.  Your wicked collusion with the Police is a public scandal and is vehemently opposed.
As I promised, my ARMY is bigger than yours. We are many, you are few. I stand for Principle and for Truth, where you rely on illegality, unethical and unfounded “injunctions” and heinous “gagging orders” against Truth.  Conflict and lies have become your oxygen.  You have provoked, harrassed, antagonised and played mind games with me for too long. It has been a battle of one person and a child against a  group of bullies in it for money and you may have won the battles so far, BUT THE PUBLIC WILL WIN THE WAR, have no doubt about that!
May I take this opportunity to thank the Public for all their support.  And let me be clear:  this stand that I am taking is not only for my daughter and myself, but for ALL those mothers and fathers who are being oppressed in a similar unlawful manner!
Yours succeedingly
Vicky Haigh