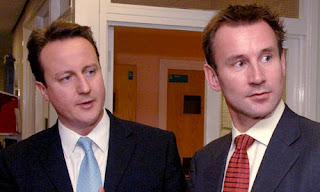 The hacking scandal is truly a question mark over the judgement of the current British Prime Minister, who for the purposes of this blogpost will remain nameless.  The person thrust into the limelight to field all the questions is none other than his most loyal henchman, Jeremy Cunt, ahem, the Hulture Minister, as the BBC is wont to call him.

The news narrative across all media is being firmly positioned that the problem here is one solely for News International, and within that structure, mostly for The News Of The World.  The BskyB episode is obviously a convenient place to lob masses of public attention, and the general discomfiture of Rupert Murdoch and a host of his lieutenants including Rebekah Brooks.  Murdoch is cooperating fully with this news narrative by arriving in Britain, and looking suitably worried for the cameras, although he already knows beyond doubt that the unkown British Prime Minister will not sell him down the river at any price.

There is one place that the media will not allow the narrative to run, except as a side issue, and that place is why the Prime Minister employed as his adviser Andy Coulson, who knew all about the dastardly deeds being committed by hackers on behalf of journalists, and the corruption of the Police.  That is the far bigger question.  Does this kind of filthy dealing extend all the way to the top?  The answer is that, of course it does.  But the BPM, seller out of Britain to the EU, supporter of military/industrial complex wars and caver-in to pharmaceutical cartels as regards the NHS, will be protected at all costs.

All we are watching is theatre, as the media pretends that the issues are being dealt with.  They are not.  They won’t be.  The BPM has done no wrong.  Murdoch will get his deal a few months away.  For now public dismay needs to be fed a bit of drama, which makes the players look as if they mean to change their ways.  That’s all. They don’t mean to change, and they won’t.  The role of Prime Minister is only an act, anyway, these days.  There is no reality to that character who walks around pretending he’s running the show.  He does what he’s told.

Britain’s reputation around the world is diving through the floor, as everyone can see the Emperor not only doesn’t wear any clothes.  He doesn’t even wipe his own backside, as he gets into position for bigger and bigger pay-off from the cartels that really run the world.

Maybe in the USA the power of the cartels can be broken, but not in the UK.  The continued suppression of our political system in favour of big corporations is assured.  The destruction of mere individuals for profit is the way it works, and no political leader has any interest in stopping that.  The only course they know is to keep the guns pointing at someone else.  For now Rupert Murdoch is willing to act as the quarry.  The whole of Parliament will act out a motion to forbid his takeover of BskyB, and then a few months later, when the public’s forgotten all about it, he’ll quietly secure his goals by some means or other. It’s all theatre.  The BPM will play his role as required in this melodrama, and then go home to his real self, if, indeed, he can find who or what that actually is.