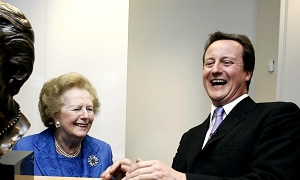 This tale is interesting.  If true, Syria has possession of three nuclear bombs which were once in the possession of Saddam Hussein.  He got them from the British, in a roundabout way.
from Veteran’s Today

Let’s refresh our minds about what happened in 1989 when a young Tory researcher, David Cameron (under the apron strings of Maggie Thatcher), went to South Africa on a sanctions-busting all-expenses-paid trip (paid by ARMSCOR) to Pellindaba, a nuclear weapons facility. David Cameron was accompanied by Sir Kenneth Warren and the purpose of the trip was to purchase three, battlefield ready 20kt nuclear bombs that the Conservatives wanted to use on Saddam in the event he did not toe the line.

Under the UN radar, South Africa, with the help of Israel, developed ten bombs and test fired one at Prince Edward Island to the South of the country. This left nine weapons that caused South Africa, US, UK and Israel great concern as they did not want them to fall into the hands of the next black regime.
The plan was to ship the entire load to Chicago for decommissioning, but Maggie Thatcher had other ideas and so just before she left office she signed an Urgent Operational Requirement (UOR) document that listed them as being three cylinders! They were prepared and shipped in standard 20-foot sea containers from Durban to Oman without any security. There was a hidden observation window so that the core temperature could be checked as required.
The deal was arranged privately using British taxpayers money and involving arms dealer John Bredenkamp with the assistance of Sir Mark Thatcher and many high profile politicians. £17.8 million was siphoned off and went into the Tory Party Election Fund; which was exposed by the Labour Party in Parliament by Lord Doug Hoyle and Margaret Beckett MP and is listed in Hansard June 22 1993 from Column 197.
The nuclear bombs arrived in Oman and were put into an insecure compound and checked by Dr. David Kelly who had the responsibility to look after the weapons and check that they were in good condition prior to the release of the money. (So you see dear Dr. Kelly knew too much). Some time later the three weapons were stolen by the same arms dealer, John Bredenkamp, and sold on the black market. It was believed that these weapons found their way to Iraq, but were then moved into Syria in three ambulances as they were highly mobile.

2 Responses to “Is Syria Equipped With Nuclear Weapons?”