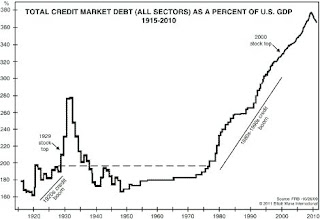 The credit downdraft is already three years old.  It could go a  lot further yet.  Credit is the largest element in money supply.  The effects of a collapse in credit across the globe are bound to be deflationary.  The only device the monetary authorities have at their disposal to counter a deflationary spiral is QE.  Despite trillions of $s being released by ‘The Fed’, the amount of credit is still falling.
I was born in 1954, when credit last bottomed – 56 years ago.  It seems likely that credit will be falling for the rest of my lifetime, and that holders of cash will find their paper worth considerably more each year that goes by.  When the world is short of cash, its value must rise, as prices get squeezed.
Financial commenters are the most energetic in arguing against such notions, I find.  I’m ready for you!  Start with house prices.  Most houses are priced at aspirational levels which they will never sell at.  The top of the market still moves, as does the bottom, but the middle, the bulk of the market, is in gridlock with nothing moving.
SILVER PRICE.  Many comments below are focusing on the silver price.  Some say this buying silver is the way to avoid the political menace of growing centralisation of power in the hands of central bankers, who are destroying fiat currencies by issuing excessive QE.  Strangely central bankers are also claimed by the same people to be trying to form a one world currency backed by precious metal.
Check out a five year silver chart –

Ignoring the recent price surge and crash, which might suggest a bubble was created, look at 2008 when the world’s stock markets crashed around the time of Lehman Brothers.  Silver halved in price from $20 to $10.  It recovered with the stock market, surged and then crashed.
How can this be said to be a safe haven?  It looks to be anything but.  Only the future can decide this one!  But the topic generates more emotion than any other in comments!
The Tap Blog is a collective of like-minded researchers and writers who’ve joined forces to distribute information and voice opinions avoided by the world’s media.