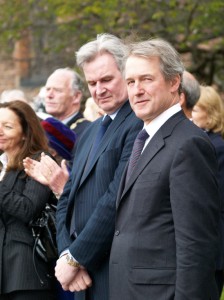 Leader Of Shropshire County Council Keith Barrow next to Rt Hon Owen Paterson MP, Secretary Of State For Northern Ireland at a parade in Shrewsbury. April 2011.

Unison is balloting its members at Shropshire County Council, in response to the Council’s proposals to cut pay by 2.7% in October 2011.  The offer is backed up with the rider that if it is not accepted, the Council will make all of its 6500 staff redundant and re-recruit them at the lower salaries offered.  On first impressions this makes Council Leader Keith Barrow seem like a modern version of a Victorian mill owner, determined to drive the weak in his care into abject poverty, and that is how the proposal has been presented in some quarters.  Certainly, not many of the details have been communicated through newspapers covering the story, like The Shropshire Star, and no sensible explanation given.  This blog post will attempt to redress that deficit.

I met Councillor Barrow for an hour this morning to ask him some questions, and he gave me the full picture as to what is actually going on, as he sees it.  Out of his control is the fact that the County’s precept is being cut by £90 million a year, out of total government cuts to Local Authorities of £6.2 billion starting in 2011.  The first people to face a cut, he told me were the elected Councillors themselves, who have decided on a 5% cut to their allowances across the board, himself included.

Next in line came the Directors and senior management of the Council.  All the 7 Directors were made redundant and made to reapply for the 3 Directorships deemed necessary to run the Council.  4 Directors were not rehired.  Those hired have abandoned their large office suites with meeting rooms attached, and now work together in normal-sized offices, which are adjacent and open plan, where communication between them and others is much easier.

Senior management, the next level below the Directors, has accepted a Pay Freeze until 2013, after between 20 and 30% were made redundant, saving £5.5 million per annum.  Annual increments for senior management have gone, and after 2013 management pay will be entirely performance related.  Redundancy used to be 3.5 times annual salary, and this had been reduced to 1.5 times, so that it has been possible to make these changes without incurring outrageous redundancy costs.

Not all Council employees are on high salaries.  Those on salaries under £13k will not be asked to take any cut in salary.  While those on £14k or above, are being asked to accept a 2.7% pay cut in 2011, and possibly the same again in 2012 unless further savings can be made in other areas.  Pensions are also being affected, and Barrow is proposing that all final salary pensions be converted to average of career pensions.  This helps female and lower paid staff, he claims, relative to those on higher levels.

The Council is actually replacing the shortfall in its £1 billion plus pension fund, caused by Gordon Brown’s taxing of pension funds, by putting £5.6 million into pensions payable this year, and by increasing the Council’s pension contribution to 11.2% of salary for two years in succession.  That way there will be no need to cut pension entitlements for any staff member, apart from those losing final salary expectations, which are now beyond reach, and possibly should never have been offered in the first place.

If the 2.7% pay decrease is accepted, there will probably be no need for any compulsory redundancies.  Of the roughly 6000 employees, 900 jobs churn each year, and of these about half are found to be not needed for replacement.  This is saving between 300 and 500 jobs every year.

Another aspect of the changes being brought in, is that the Council is doing less, and commissioning more.  Even libraries, none of which are closing incidentally, could soon be run with a combination of community, council and private staff.  Highways maintenance is already contracted out, currently in a joint contract with Cheshire West, making big savings.  Other counties adjacent to other borders, are expected to join in, making highways maintenance yet more cost effective.

The Council is considering going further still, for example, cooperating with other smaller Councils into Wales, by providing chargeable legal services to other Councils.  There are numerous opportunities for increasing efficiency, by Councils working out which jobs they have to do themselves, and what they can contract out, or provide as a service to other Councils. 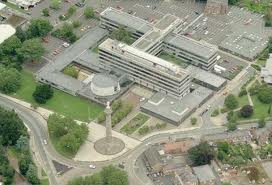 The Shirehall In Shrewsbury

Of course, not all stakeholders look positively on the situation, and while the GMB Union has decided to accept the situation, however unwillingly, Unison is balloting its members for strike action.  With so few Council workers being unionised, and with so much work contracted out, you might wonder if anyone will actually notice if they do strike.  Councillor Barrow doesn’t know about that, he says but he thinks a strike would save the Council a lot of money, and hurt the strikers’ pockets as they won’t get paid.  He hopes the strike will not be necessary, and he feels he couldn’t be doing a better deal for the workforce at Shropshire’s Council.

It doesn’t sound quite so bad when you hear the details, as with most news stories.  They just want a headline to sell their papers, of course, while readers do actually want to know what’s going on.  That never seems to occur to them, for some reason.

5 Responses to “Shropshire County Council Strike Will Save Ratepayers Money”