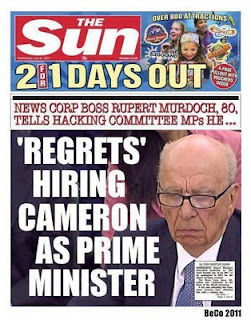 Ed Miliband did well, adopting the right tone.  I only saw the last part.

Cameron on the counter attack, relying heavily on statements yesterday from Rebekah Brooks and Rupert Murdoch.

The problem is for both our two parties (what happened to the Lib Dems?)

viz.  Coulson gave me assurances he didn’t know about the hacking, and I believed him.

Tom Watson’s question.  He did notify Cameron in  a latter that Coulson had been involved in illegal activity.  Cameron did  not reply to the letter.

Fallback to different defence –  ‘his conduct at No 10 was beyond reproach.  I gave him a second chance.’

Trying to get on with media companies to get our message across.

Our mistake (both parties) was not to regulate relations with the media.

In other words, our house is in order.  It’s the media that’s at fault.

TAP – what difference will that make?  None at all.

Next question about what didn’t come out yesterday –

Let’s get on with the enquiries  –  LONG GRASS.

Next MP – Terms of Reference for the Leverson Enquiry are too narrow.  Must include all information crime.

Cameron happy with that.

Mensch – attacks partisanship, then is partisan.


Skinner did he discuss BskyB in the meetings with Brooks and NI?
Cameron: I never had one inappropriate conversation.  I took myself out of every thing to do with this bid.


That is very weak, merely echoing what Rebekah Brooks said, word for word.


Cameron rushing for the enquiries to get on with the job and for the Police investigations, as his cover.


David Lammy – asks about the informality of his relationship with Brooks.  Cameron’s answer is about formal contacts.  I have never seen her in her pyjamas.  Again, not answering the question.


Next question a specific example of information being supplied indicating Coulson was known to be involved in criminal activity against a senior member of government. (missed the name)


CAMERON – I take responsibility for employing Andy Coulson.  He didn’t behave in any way inappropriately during his time in Downing Street.


The BBC cannot be left out of the coming media debate entirely – although no sense of any problem with their monopoly.


Handy Cock! WAS BSKYB MENTIONED?  I asked to be taken out of the information about BskyB to avoid being compromised.


A.  It was the correct procedure.


Repeat of Q from Watson – what is the answer about Watson’s letter?

Q.  Brooks said Osborne chose Coulson.  Was it true or was she trying to protect her friend the Prime Minister?


Q.  Was Coulson put through standard vetting?
A.  SPad code of conduct, which he obeyed unlike Damian McBride.


Q. Chequers being used for media slumber parties
A  He won’t invite Rebekah Wade to one. (getting cocky)


REPEAT Q about Watson’s letter advising him of Coulson’s criminality.  He says he will go back to No 10 and reply to it robustly.  (sent nearly a year ago)


1 PM CAMERON – ‘all my conversations are appropriate.’ very cocky.


I bet that Cameron reassured the Murdochs that Vince Cable was being shifted and replaced with Jeremy Hunt.


And who set up Vince Cable?

Carl Bernstein – The News Of The World was run on thuggery.  Like many parts of the Murdoch empire.  Some titles are run respectably.  Others are in the sewer.
The last thing we need is to overreact and over-regulate the Press. The government would end up in greater control, and the people more disenfranchised.  The law needs enforcing.  But as the Police are corrupted and in cahoots, it’s the lack of law enforcement that is the problem.
Murdoch is the most powerful individual in British politics.  The coming to light of the awfulness of what Murdoch has done is bringing to light the institutional abuse of power, where the institutions were captured by Murdoch, and corrupted.

7 Responses to “Cameron vs Miliband”