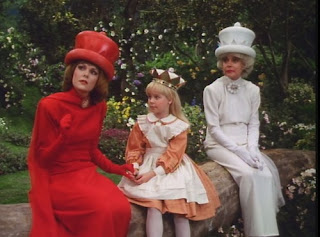 ‘The rule is jam tomorrow, jam yesterday but never ever jam today’
Lewis Carroll.  Alice Through The Looking Glass.

…the prime minister told Tory MPs on Wednesday night that Britain would press for concessions in EU negotiations that are likely to take place on how to manage the eurozone more effectively.

The changes, which will apply only to the 17 members of the eurozone, will have to be approved by all 27 members of the EU. Britain will have a veto in these negotiations.
In his meeting with the 1922 committee of Tory backbenchers on Wednesday night, the prime minister echoed a two-pronged message he delivered in a recent interview with the Spectator. Cameron told the magazine on 7 July that Britain accepted the eurozone would move “towards much more single economic government”. But he added that Britain should use the negotiations to win concessions.
The prime minister said: “There will be opportunities for Britain to maximise what we want in terms of our engagement with Europe … I got us out of the [euro] bailout mechanism which has been used repeatedly and from 2013 cannot be used again, so I think I exacted a good and fair price for Britain going ahead with this treaty change.
“Are there more things we’re going to be able to do? Yes, I think there will be opportunities.”
Clegg endorsed the prime minister’s view that there would be greater fiscal co-ordination in the eurozone. But he dismissed the idea that Britain should use the negotiations to demand concessions. (Telegraph)

No dates.  Nothing specific.  Just a general statement of something, sometime, in the future, if it can be negotiated.  Dare I say ‘It sounds like the usual bollocks to me’?

‘No one in Britain, however sceptical they are about the euro — and they don’t come much more sceptical than me — should have any doubt about the immense commitment there will be from other European countries to make the euro work,’ he says. ‘We would be kidding ourselves if we thought somehow they’re sitting around thinking, gosh it’s not going very well, how are we going to get out of this one? That’s not what they’re doing. To them the euro is absolutely central to their vision of their membership of Europe — and they will, I think, do pretty much anything to make that work.’
The eurozone, he adds, will have to move ‘towards much more single economic government’. And in that, crucially, he sees a great chance to renegotiate Britain’s relationship with the European Union. Or, as puts it in a slow and deliberate way, ‘There will be opportunities for Britain to maximise what we want in terms of our engagement with Europe.’
Eurosceptics accuse the Prime Minister of having fluffed one such opportunity when he agreed to the treaty change that established a permanent bailout mechanism for eurozone members. But Cameron stresses that he did receive something in return. ‘I got us out of the bailout mechanism which has been used repeatedly and from 2013 cannot be used again, so I think I exacted a good and fair price for Britain going ahead with this treaty change.’ But then he says again: ‘Are there more things we’re going to be able to do? Yes, I think there will be opportunities.’
These words represent quite a shift in the British position. Until recently, the coalition line has been that because a stable eurozone was in Britain’s interests, we wouldn’t capitalise on any crisis to pursue a narrow national advantage. Now Cameron is talking explicitly about ‘opportunities’ and how to ‘maximise what we want’. He has an endgame, then, for the euro crisis, but it’s not something he expects to be playing tomorrow. As he puts it, ‘Sometimes Europe gets to a crossroads and takes quite a long time to decide what it’s going to do.’

Cameron is moving words around, but what difference will there be?  He urgently needed to pacify any possible revolt from his own MPs and from Steve Hilton who’s threatened resignation over this, while he asks the Murdochs to back off for a while.  The Murdochs will be back later, covertly demanding more integration of Britain into Europe, to fend off pressure from the EU Competition Commissioner, the only person on the planet who can threaten their worldwide TV football monopoly – their greatest cash cow.


It’s back to sounding eurosceptic for a while, and raising backbenchers’ hopes before the inevitable climbdown that will follow in a few months time.  And that’s all Cameron is buying – time – time for the EU to push through its integration into a single political and financial entity without opposition from Conservative backbench MPs.  Once the EU federal state is established, it already has the power within the Lisbon Treaty to force Britain to adopt the Euro.

The Depression followed on from the Wall St Crash in 1929.  The bankers stopped the bail-outs, prices crashed and they bought up America for bargain basement prices.  They’ve created the unpayable debt scenario across the world.  When will they pull the plug and stop the bail-outs?

by GawainTowler
How long before the MSM realizes Europe just launched QE?
The eurozone summit is a meeting of bankers, says Nigel Farage without MEPs allowed in.


TAP – They’re preparing the modern version of 1929, where they will crash all asset prices simultaneously and clean up, buying everything at bargain basement prices.  But first they are ensuring the debts of the eurozone periphery are held across the continent, crippling all countries at once, before they go for the ‘pull’.
The Tap Blog is a collective of like-minded researchers and writers who’ve joined forces to distribute information and voice opinions avoided by the world’s media.