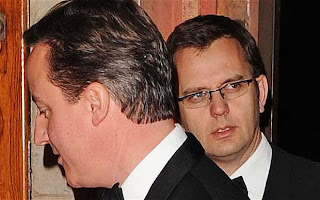 Rarely photographed together, Cameron and Coulson.  Normally Coulson is pictured alone in the street by the media, suggesting a lone wolf, when in fact he was, until Hackergate broke, at the heart of Cameron’s political operation.

The narrative is created by the powerful to steer public attention to the harmless zone.  Murdoch has played a blinder, and continues to do so.  He knows that if Cameron survives as PM, he will ultimately be able to keep his privileges and even extend them.  Meantime he’s created a newspaper closure – or at least a change of its name, and some dramatic news coverage of mostly innocent NotW workers being slung out of work, while he sets up The Sun On Sunday to re-employ them all.

The TV studios have filled with people all in agreement that things cannot go on like this, including the star of the show, Hugh Grant, who knows his lines perfectly.  Anyone can be attacked bar one, and that person is David Cameron.  As long as his character plays his role, and focuses his ire on the right targets, the movie directors will keep him in the show. 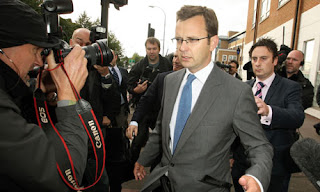 Today the story needs a new angle, as it does nearly every day, and Piers Morgan is being trotted out for a piece of the treatment.  The media also know the rules of the game.  Anyone is in season right now, except one, someone who is being a little unwilling to come onto the stage at the moment.  The one thing that must be avoided is a moment when he seems to be involved personally in the growing soap opera.  But the more media ‘aristocrats’ they summon to the guillotine, the more the King’s position falls into question.

Mr Cameron, how much did you know?

Here is his current answer to that growing question.  It is Clintonesque – as in  ‘I did not have sexual intercourse with that woman’.  It has echoes of Nixon’s ‘Your President is not a crook’.  It is a bald sentence that the world knows is untrue, but, without evidence to the contrary, will have to accept…as twittered here… 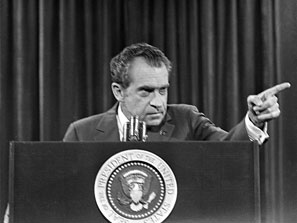 Anger is a dangerous emotion.  People in Britain are angry not only at the hacking of grieving families in their moment of loss.  They are angry at the economy, the price rises, the tax rises, the lack of jobs and the cuts.  That anger is looking for a way to express itself.  Could it be that once the Hackergate narrative has run out of Rupert Murdochs, Hugh Grants, and Piers Morgans, there is only one name left which must finally face his responsibilities.  When the moment comes, will he survive like Clinton or be found lacking like Nixon?  The clock is ticking closer to that moment.

It’s only a whisper at the moment, but the whisper could grow quickly, if just one person gave it a tiniest whiff of encouragement.  Those who could whistleblow must know that their lives are in danger right now.  They have seen what happens to Dr David Kellys, and maybe others like Robin Cook.  Information might be leaked, from somewhere by someone who knows something, but the motivation for those in the know to keep quiet must be great.

TWITTER – People are actually more concerned about their own finances than the Murdoch family finances, pollster Deborah Mattinson #newsnight#hacking

People are not as gullible as they were in 2003, and attempts to bury the bodies and stop the news from escaping, might be spotted.  We already have one suspicious death at Glastonbury two weeks ago, which still has no obvious explanation.

Cameron is a prize asset of the One World Government – of the military industrial complex which has four wars in process, the pharmaceutical and medical cartels which don’t want their control of the NHS touching, or of agribusiness who is bringing in GM foods on the quiet, and of the wind-power mafia.  He will not need to send out the assassins.  They will be out there seeking their targets, all by themselves.  But even then the vital information could slip out.

You think I’m making this up?  See how whistleblowers get treated.

2 Responses to “Cameron – ‘Your Prime Minister Is Not A Crook’.”