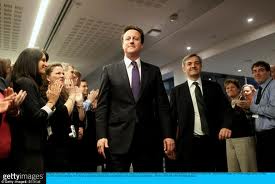 I read Roger Helmer’s Strasbourg Newsletter yesterday, and he rightly points out how destructive the EU’s 30% CO2 emissions reduction target would be, if applied as the current Conservative LD Coalition desire, by 2020.  Roger deals with the economic consequences, but is there a subtext here?

The only way emissions can be cut by 30% is for the population to reduced by a similar amount, as Bill Gates explained in his talk last year.  Population level is the primary cause of CO2 emissions. Britain’s 65 million, if cut to 45 million, would emit a lot less CO2 and everything else, and the planned release of Fluoride into Britain’s already filthy water supply would accelerate the rate at which people die quite nicely.

As Southampton found out this month, the local Council has no control over the water supply any longer.  If the NHS Trust in control of the area decides to release Fluoride into the water, opposition by 99% of the population makes no difference.  The poison, which kills rats and cockroaches effectively, can deal equally well with humans, will be used to bring about the required reduction in our numbers.  It is the NHS which is the agency instructed to bring down the population, and if they can’t kill people fast enough inside their hospitals or by the issuing of ‘inappropriate’ i.e. toxic pharmacy, they will get  there a lot faster by getting the whole population to drink a poison which is known to kill any living organism, animal or plant, without noise, odour or colour – Fluoride, known as The Devil’s Poison for that reason. 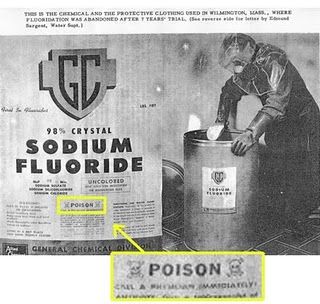 The removal of local councils from the decision to Fluoridate water is the key.  It is from inside the highly paid NHS bureaucracy that the death blow to Britain’s health and population will be dealt, deliberately for the ‘sustainability’ of the planet, the slogan of the elites who have decided they want the numbers of people walking around, knocking down a touch.

This piece at UK Councils Against Fluoride explains the current legal battle going in Southampton where the local Area Health Authority is trying to exterminate its population.

EXTRACT – The arrogant members of the Board of the South Central Strategic Health Authority (SHA) are determined to defy overwhelming public opposition to fluoridation. They have just confirmed that they have ordered Southern Water to fluoridate the public drinking water supply to 190,000 people in the City of Southampton.

The SHA had been stalled in its ambition to fluoridate Southampton’s water supplies by Mrs Geraldine Milner’s High Court attempt to challenge the process that it had carried out its autocratic ‘public consultation’. But when this was rejected in February, the SHA moved with indecent haste to order Southern Water to prepare to impose fluoridation on the City’s population of 190,000.

But it became apparent that some of this contaminated water would spill over into the water supplies to the satellite towns of Totton and Eling, on the western side of Southampton Water. So now, the Totton and Eling Town Council, with 30,000 souls under their care, last week announced that it is standing up to the SHA bullies.

Parliament (European) votes down the 30% emissions proposal
The Eickhout report proposed to raise the EU’s emissions reduction target from the current 20% by 2020 to 30%.  The Conservative MEP delegation takes the view that it would support 30% only if the rest of the world signed up to the same figure — and that won’t happen.
For myself, I oppose 30% absolutely (and 20% as well), as it will have no effect on climate, but will make energy more expensive, and drive energy-intensive businesses offshore to jurisdictions with lower environmental standards.  So we could well end up with two tons of CO2 in India or China to save one ton in the UK.
Higher emissions targets will force up energy prices even more quickly than Chris Huhne’s current plans will do, driving more households into fuel poverty and putting thousands of pensioners at real risk of harm from winter cold.
The Guardian has tried to talk up a “rift” between Tory MEPs and the Party in Westminster.  In fact, we’ve agreed to differ (and many Conservative back-benchers in Westminster would support our opposition to 30%).
I am delighted to record that the whole report was voted down today (July 5th) by a substantial margin. It’s difficult to predict what will come next, but I can’t see the Commission coming forward with legislation based on the 30% target after the parliament has decisively rejected it. A job well done.
The Tap Blog is a collective of like-minded researchers and writers who’ve joined forces to distribute information and voice opinions avoided by the world’s media.