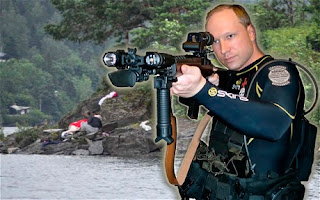 Straight from a Hollywood Set Comes
SUPER-TERRORIST
designed to instil fear and confusion, as governments plan to dismantle opposition, and impose Police States in all western countries.
Now we’re seeing the follow up to the Hacking Scandal.  First, opposition from the media is to be dismantled.
PM Cameron says that the ‘Press’ and TV Journalism is to be placed into a new and strict ‘regulatory’ framework.

There is nothing new about hacking and corruption in the news gathering world.  It’s been common practice for decades.  What is new is the government allowing the public to see what the media has been up to.  That’s not been allowed with the intention of sorting it out, though, but to use the scandal as the excuse for implementing draconian new laws, which otherwise would not have seemed justified.

The Police are to be placed inside a military framework. (See AP below) 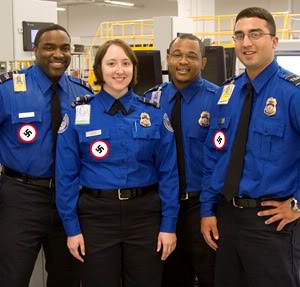 Cameron wants to bring similar to Britain.
The notorious TSA in the USA.

Two enormous reductions in peoples’ freedoms are being rushed out, in the name of a false clean-up of politics.  Cameron isn’t looking to do that at all. He is just rushing ahead, as fast as he can, with the crushing of individual freedom , and the extension of state control.  No wonder he sounds so cocky as he bats away allegations of wrongdoing in No 10, when he knows that soon there will be little opposition from the media, and he’ll be able to arrest political opponents, on the back of new media regulation.

To achieve that, he also needs to beef up the Police and make it into a far more threatening institution that it has been in the past.  He intends to end the rule of Murdoch et al, and bring the news organisations and networks under his own control, not to revert to free and fair democratic process.  He and his hidden backers want to be in a supremely powerful position, where they can ignore all opposition.

Army officers could be parachuted into the highest police ranks as part of a major Government shake-up.
Downing Street is looking at changes that would establish an “officer class” in local forces, according to the Sunday Times.
Senior intelligence personnel, civil servants and lawyers could also be fast-tracked into top positions, while university graduates could be put through a Sandhurst-style college to speed their progress.
A Home Office spokeswoman said: “As the Prime Minister said in the House of Commons this week, we are interested in radical proposals for the future of leadership and training in the police service.
“Tom Winsor, the Government’s independent reviewer of police pay and conditions, is considering the issue of entry into the police service and will make recommendations in the second part of his review, due to be published early next year.”
This the perfect way for the government to bring Policing forward to the point where the programmes of the United Nations to collectivise society, remove all property rights and depopulate the country can be more easily carried out.  Political opposition will become impossible, as the new ‘leadership’ within the Police prepares to impose a closing down of civil society and impose the power of the single World Government.
AP article sent in by ME in comments.
The other way they are now justifying removal of liberty is by talking of British ‘supporters’ of Norway’s super-terrorist.  This guy is clearly straight off a movie set of terror,  manufactured, with studio shots and make-up as a figure of terror to confuse and instil fear across all peoples in the world.
Now we see what their next political moves are, we are starting to see why they’ve created him.
They are ‘hunting down Super -Terrorists’ British supporters’.
We now see 911 as a false terror event created to justify wars in the Middle East.  This latest terror event is no different, set up and put into effect at the moment the crushing of political freedoms across Europe is ready to put into effect.  No doubt extreme financial events will occur which will also appear to justify, or be used to justify massive increases in state power, elimination of opposition and the ending of national sovereignty and individual freedoms.
The terror events are designed for maximum psychological impact, to be the most shocking imaginable.  Yet already an intelligent mind sees the strangeness of what occurred.  One man could not set up all that was claimed he did.  There was the usual Terror Exercise at the same location in Olso 48 hours beforehand, as happened with 911 and 7/7.
Why could TV helicopters and cameramen be circling the island while the killing was going on?  Yet the Police and the Special Services didn’t arrive for 2 hours?  The only rescuer was a chance German tourist who was nearby in his boat.
Comments –
Wasp – ………THE FACT THAT HE IS A 3rd. Degree Mason, IS OF NO CONSEQUENCE. THE FACT THAT HE IS A KNIGHT OF MALTA IS………..
This is undoubtedly false flag.  Eyewitnesses saw three gunmen, not one.  Alex Jones explains .  There have been hundreds of False Flag attacks in Europe since the war.  They are intended to demonise groups.  Right wing groups are currently being targeted.  They’re demonising free speech.
A terror drill in Oslo hundreds of yards away from the real attack, 48 hours before.  The Norwegian PM’s office was bombed.  Then how was it known he was going to this media retreat?
Now they’re blaming the attack on all the groups that are anti-EU, anti-New World Order, anti-banking cartels.
http://www.guardian.co.uk/commentisfree/2011/jul/25/anders-behring-breivik-norway-extremists
http://www.express.co.uk/posts/view/260974/Cameron-Hacking-has-shaken-public/
The Tap Blog is a collective of like-minded researchers and writers who’ve joined forces to distribute information and voice opinions avoided by the world’s media.