from www.ukip.org
It was odd when Steve Hilton broke cover as a rampant ‘let’s quit the EU’ advocate two weeks ago.  Then we had the strange death of Christopher Shale who actually was a eurosceptic, the day his memo to Cameron was leaked to The Mail On Sunday.  And now we have Oliver Letwin suddenly discovering an urge to quit the EU, he of Conservative Policy formation since 2005.  In the same week, we see the creation of the alleged group of  100 Conservative MPs joining the group to try to reform the EU.  There has never been so much street theatre since the days of Shakespeare.  And it’s all bollocks. 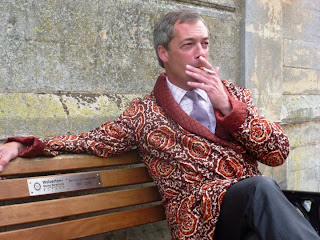 Farage is singeing traitorous Tory rumps, and they’re getting jumpy
Cameron is sold out to the EU, NATO, the UN, Common Purpose, the NWO.  The Conservative Party belongs to the banksters, lock, stock and barrel.   It’s finding UKIP ahead of the Lib Dems in the North, and at 5% nationally, which is worrying them.  That’s all.
The Tap Blog is a collective of like-minded researchers and writers who’ve joined forces to distribute information and voice opinions avoided by the world’s media.