A great deal has been going on behind the scenes in both Scotland and Shropshire over the past few months.

In Scotland, First Minister Alex Salmond has been exposed by legal magazine The Firm with its headline of 11th July First Minister in a missing records riddle over Hollie Greig abuse allegations, followed by another article on 15th July.

In Shropshire, Shrewsbury psychologist Carolyn McQueen is facing an investigation by her professional body over Hollie`s case and a local GP may soon be facing serious disciplinary action in direct connection with Shropshire council`s appalling attack and conspiracy against Hollie and her mother.

The Council are still withholding vital documents from the Court. 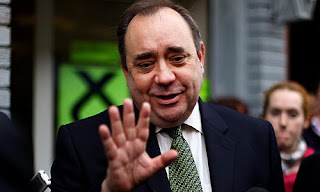 
Story From The Firm

The legal adviser to the family of a disabled woman who claims she was abused by a paedophile ring as a child was arrested yesterday [Friday] as he made his way to the centre of Aberdeen to hand out leaflets.

Political hopeful Robert Green represents the mother of Hollie Greig, a 30-year-old woman with Down’s Syndrome who says she was sexually assaulted by a Scottish sheriff, who is still serving, and a senior Grampian Police officer who is now dead.

Last night, 63-year-old Mr Green was charged with breach of the peace. He is expected to appear at Aberdeen Sheriff Court on Monday.

It is understood he was arrested as he made his way to Union Street, where he was going to tell people about Hollie’s case and his plans to contest the Aberdeen South parliamentary seat as an independent candidate. Mr Green, of Cheshire, had been staying at a bed and breakfast in King Street.

He was expected in Union Street near the Marks and Spencer store at 10.30am but never arrived. Other “injustice” campaigners, including Aberdeen man David Emslie, formerly of Nigg Kirk Road, were waiting for Mr Green and said they were concerned for his safety when he did not appear.

A spokesman said: “A 63-year-old man has been charged in connection with a breach of the peace. “As this case is now active, it would be inappropriate to make any other comment.”

Police, with the consent of Mr Green, searched his room in King Street and are believed to have left with documents belonging to him.

Hollie claims she was abused for 14 years from the age of six and has given police the names of some of the men she says assaulted her. The 30-year-old and her mother, Anne, have been campaigning for criminal proceedings since 2000.

The abuse is alleged to have taken place in Aberdeen, and Hollie and her mother claim to have made a statement at Bucksburn police station in July that year naming those involved. The family moved to Shropshire and two Grampian Police officers travelled to Shrewsbury in September last year to re-interview Hollie at a special facility.

Last month, the Crown Office revealed there was not enough reliable evidence to proceed with the case.

A spokesman said at the time: “Historical allegations of sexual abuse made by a 30-year-old woman in Shropshire have been thoroughly investigated by police.

“Crown counsel have considered all the available information and decided that there is insufficient credible, reliable and admissible evidence to justify criminal proceedings in respect of these allegations.”

Despite no charges ever being brought, Hollie received £13,500 compensation from the Criminal Injuries Compensation Authority in April last year.

It is understood that followed evidence from a Grampian detective inspector, who described Hollie as “a truthful witness to the best of her ability and an entirely innocent victim”.

Mrs Greig, 58, claims her daughter has experienced nightmares and panic attacks since she first told her about the alleged abuse.