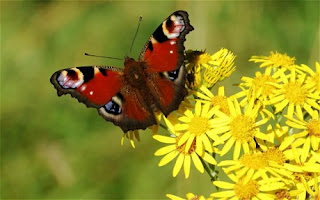 Ragwort – a dreaded weed or a vital part of Britain’s eco-system?

Monsanto, Barrier Biotech Ltd, Ragfork, The British Horse Society and Warwickshire Council have been caught out by the Advertising Standards Authority displaying inaccurate and misleading information on their websites and in leaflets about Common ragwort, a British wildflower important for wildlife conservation.  All the organisations have agreed to remove information that wildly exaggerated how many horses die from Ragwort poisoning or made false claims that landowners have a legal obligation to ‘control’ it.
Advertising codes are laid down by the Advertising Standards Authority to ensure advertising is legal, decent, honest and trustful.

Monsanto, an agricultural company who sell a range of ragwort herbicides made false claims on their website stating that “landowners have a legal obligation to control Common ragwort and prevent its spread”. This is not true.  A land owner may be ordered to control ragwort if there is a significant risk to livestock and they have not followed the Government’s ‘Ragwort Code’ but there is no automatic legal obligation.

Defra state that “The code of conduct does not seek to eradicate ragwort. Ragwort as a native plant, is very important for wildlife in the UK. It supports a wide variety of invertebrates and is a major nectar source for many insects”.

The British Horse Society and Warwickshire Council have also been caught out promoting a misleading leaflet on ragwort on the Council’s website that stated “It is an offence to allow ragwort to spread from your land”.

Ragfork a company selling a ragwort removal tool, claimed that “It is responsible for the deaths of up to 6,500 horses and ponies in the UK each year.”  They conceded there was no evidence for this and removed the statement from their website.  In fact numbers are so low that the Government have stopped recording them.  In the UK Government figures for 2005 record just 13 deaths.

Matt Shardlow, Buglife Chief Executive said “At least 30 insect species are entirely reliant on Ragwort and about a third of them are scare or rare. Ragwort is also a critically important nectar and pollen source for hundreds of species of butterflies, bees, moths, beetles and flies, helping to maintain what remains of our much declined wildlife.  While it can be harmful to horses in large amounts the main threat is dried ragwort illegally sold in hay and this is where we should focus efforts, not on spraying the countryside with more pesticides, or ripping plants out of roadside verges”.
Neil Jones, the Buglife and Swansea Friends of the Earth member, who raised the issue with the ASA said “Ragwort is subject to a whole set of campaigning myths which are repeated daily on the internet and in the press, including speculation about the spread of ragwort becoming greater every year. I am glad to see some of the organisations spreading the untruths are being held to account.”

Matt Shardlow, Buglife Chief Executive said “There are still numerous websites and leaflets with misleading Ragwort information. You can help to encourage the promotion of legal, honest and trustworthy information about this wildflower by contacting those misleading sites and drawing their attention to the Government’s ‘Ragwort Code’ or the Ragwort information pages on Buglife’s website”.

For truth about the effects of Ragwort and its importance for wildlife go to:-
http://www.buglife.org.uk/conservation/currentprojects/Habitats+Action/Ragwort

Photographs – Please contact Buglife for images of Common ragwort and the invertebrates it supports. Please credit the named photographer and Buglife when using requested images.

Buglife-The Invertebrate Conservation Trust is the only charity in Europe devoted to the conservation of all invertebrates, and is actively working to save Britain’s rarest bugs, bees, butterflies, ants, worms, beetles and many more fascinating invertebrates. Further information is available on Buglife’s website at www.buglife.org.uk


From Merav Wheelhouse of Karuna Project, near Shrewsbury, UK.