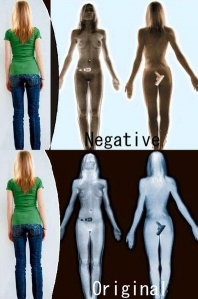 Airport body scanners have attracted a lot of controversy as regards privacy.  They create an as if naked image for security staff to view, which could of course be used for ‘other’ purposes, and no doubt are being so used.

My concern is a little different.  My girlfriend is pregnant, and under visa rules will soon have to travel back to the Philippines.
X Rays are very dangerous to unborn babies, especially in the early stages of pregnancy.  My plan is to find out which British airports don’t have scanners and travel from there.  Are   there any?  Does any one know?  Edinburgh?  Cardiff?  or even Dublin?  I would go to any of them to avoid the scanners.
This article gives the story behind my concerns –
The scanners may not be safe for certain people, particularly children and women in the early stages of pregnancy, according to Dr Sarah Burnett, who works as an independent radiologist in London.
“It is illegal to expose people to any level of radiation without medical justification,” said Dr Burnett, who raised her concerns after being asked to undergo a full-body scan at Luton Airport.
“So how is it that the Government is allowed to irradiate us willy-nilly at airports?
“I am particularly concerned about the potential effects on women in their first trimester of pregnancy.
“That is when the risks of the baby developing genetic abnormalities are highest because radiation exposure can damage the body’s reproductive DNA.”
Evening Standard

Sarah Burnett is a Consultant Radiologist in independent practice in London.
She spent her two pre-medical years at King’s, London, before going to Westminster Medical School, qualifying from the University of London in 1985. Having gained her Membership of the Royal College of Physicians in 1988, Sarah subsequently went to St Bartholomew’s Hospital to study radiology. she spent a year doing research at St Mark’s, before becoming a Fellow of the Royal College of Radiologists in 1992.
Sarah became a Consultant at St Mary’s, and the Royal National Orthopaedic Hospital in 1993. She also spent some years as the Admissions Tutor for Medicine at Imperial College.
In 1995, she graduated with an MBA.
In early 2001 Sarah left the NHS to work independently. Her speciality is musculoskeletal imaging, which is X-rays, CT, MRI and ultrasound of the bones and joints. Her particular area of expertise is ultrasound guided anti-inflammatory steroid Injections.
Sarah also enjoys writing, and, not confining herself to textbooks, obtained an MA in Creative Writing in 2008.
Sarah lives in London with her husband, two children, and two

5 Responses to “Which British Airports Don’t Have Baby-Killing Machines?”