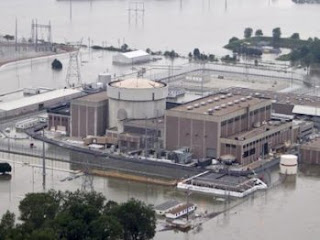 Not another flooded nuclear power plant!

Is this why Alex Jones isn’t covering this – he doesn’t have a choice?

“A shocking report prepared by Russia’s Federal Atomic Energy Agency (FAAE) on information provided to them by the International Atomic Energy Agency (IAEA) states that the Obama regime has ordered a “total and complete” news blackout relating to any information regarding the near catastrophic meltdown of the Fort Calhoun Nuclear Power Plant located in Nebraska. According to this report, the Fort Calhoun Nuclear Plant suffered a “catastrophic loss of cooling” to one of its idle spent fuel rod pools on 7 June after this plant was deluged with water caused by the historic flooding of the Missouri River which resulted in a fire causing the Federal Aviation Agency (FAA) to issue a “no-fly ban” over the area.”

From ‘Me’ in comments.