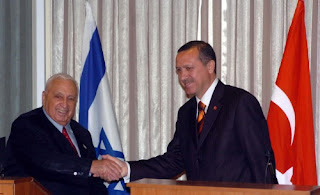 Erdogan of Turkey shakes hand of Sharon in 2004.
The summary of today’s piece from Global Research shows that the wars being started across Africa, the Middle East and Central Asia have been in the planning stage a long time.  War is now being either executed (or planned) right across these zones, along the border with Russia right up to the Chinese border.
The trade-off with China must be that China is being permitted to dominate South East Asia, starting with seizure of assets in the South China Sea.
Dangerous Crossroads: The Broader Middle East War
Israel and NATO signed a far-reaching military cooperation agreement in 2005. Under this agreement, Israel is considered a de facto member of NATO.

If a military operation were to be launched against Syria, Israel would in all likelihood be involved in military undertakings alongside NATO forces (under the NATO-Israel bilateral agreement).  Turkey would also play an active military role.

A military intervention in Syria on fake humanitarian grounds would lead to an escalation of the US-NATO led war over a large area extending from North Africa and the Middle East to Central Asia, from the Eastern Mediterranean to China’s Western frontier with Afghanistan and Pakistan.
It would also contribute to a process of political destabilization in Lebanon, Jordan and Palestine. It would also set the stage for a conflict with Iran.


Global Research link to article
The Tap Blog is a collective of like-minded researchers and writers who’ve joined forces to distribute information and voice opinions avoided by the world’s media.