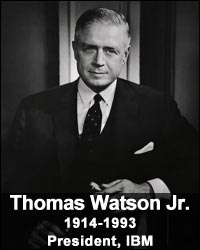 He built IBM and the NAZI information war machine.
IBM was involved in virtually every aspect of the Third Reich’s operations.

Millions of people went through the Nazi’s concentration camps.  It required a vast information system capable of keeping control of all these people, able to decide who would die and who would live.  IBM built the computer system the Nazis used, based on punch cards, designing it not from standard software but made specifically for the task.  The machines were installed, run and maintained by IBM New York throughout WW2.

IBM’s involvement has never been talked about since.  There has never been an apology.  On the contrary, IBM today is building the microchip system which will enable governments to place a chip inside every human being on the planet.  The bankers will be able to cut off anyone they don’t like from the ability to pay.  Cash will no longer exist.  People will only possess credit on their microchip.  Anyone they don’t like can be taken out of the system simply by the click of a mouse.  Unless others help them, they will just starve.

Read HOW IBM HELPED THE NAZIS.