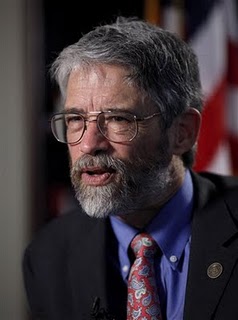 John Holdren is his name.  He is an ecological fanatic, an anti-humanist and he is running US policy in accordance with the views of the UN and its Agenda For The 21st Century.  He calls himself a neo-Malthusian.  He believes human population is a cancer on the face on the earth, and must be dramatically reduced.  Webster Tarpley explains.  Holdren believes the optimum world population is 1 billion.  That means 5 billion need to go.  Watch the video.  The details just get worse and worse.  No wonder there are nuclear ‘accidents’ happening in Japan.  No wonder wars are being started all over the place.  The only question seems to be how quickly can 5 billion people be killed, and how?  The idea that their removal from the planet might be in question, is misplaced.  It is already official US Government policy.

This should be on the front pages of newspapers worldwide!   Of course it never will be.  This evil creature, John Holdren should be in a padded cell in a maximum security unit somewhere far away from the rest of humanity.  Instead he is an “adviser” to Obama!

I think this confirms without a shadow of doubt, the awful truth that a lot of us now are quite aware of anyway. Which is of course are the plans that the crazy evil ruling elite have in store for the masses, or lower orders, according to them.
It is quite admirable how Webster Tarpley was able to deliver this information in such a workmanlike and straightforward way.  I know that I wouldn’t have been able to resist the odd “bloody hell” or probably something much stronger even.  You are quite right Tap when you say that the details given by WT just get worse and worse.  It was actually very chilling to watch and listen to.  The US administration didn’t hire the services of this creature JH for any “good” reason.  Their plans and objectives couldn’t be any clearer. However it’s good to see that many more people are catching-on every day.
Gillian

I note that the E Coli bacteria in Germany is claiming more victims.  It is the first bacteria to be resistant to all known anti-biotics, which it is suggested, cannot happen except in laboratory conditions.


What with the suggestions of the nuclear attack on Berlin’s stadium, Germany seems to be the focus of the OWG’s best attentions this month, now that the Japanese nuclear catastrophe has been removed from all media.  The rush to eliminate human beings seems to be being pressed ahead in all its manifestations globally.  Humanity is not yet aware of these bestial evil characters dripping their poisons into our childrens’ bodies.  At the moment they can work without any opposition.  David Cameron is sold out to them.  Ed Miliband is being brought to heel.  Clegg a joke.   Farage willing to try to oppose but without the media to inform people, how can he?