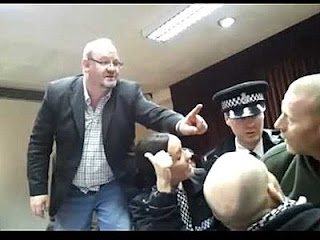 The video no one in Britain is allowed to see –

beamed in from the USA –

There is no law banning this video.  It is entirely legal.  Yet Google has been requested by the British authorities to remove it from circulation.  Watch it while you can, as this copy has not yet been identified and removed.

The event as reported by The Mail

And as reported by the British Constitution Group –
For our explanation of the arrest of Judge Peake itself, please see:

There are two main reasons the videos have been taken down, I think. First, there are outstanding court cases for two people in the videos who have been charged with assault. The videos clearly show who assaulted whom, and neither of the two guys arrested assaulted anyone.

The other reason is that the government does not want the actual arrest and rescue of Judge Peake seen. As Twig said, they do not want publicity for Lawful Rebellion.

The mainstream media, where they reported it at all, has mainly portrayed this event as some kind of tax protest. It wasn’t. It was designed to highlight the unlawful imposition of administrative courts in this country.

It was also designed to highlight *our* lawful use of the Grand Jury, the Posse, and the Militia, all still lawful bodies.

The fact that it happened at a hearing of the separate issue of the tax protest of Roger Hayes has no bearing on that day.

For the record, though, Roger’s tax protest doesn’t result from any absolute unwillingness to pay tax in principle, but the fact that council tax is being used for unlawful purposes. If we pay council tax, therefore, we are complicit in that law breaking. For an example – the Audit Commission’s continuing unwillingness to sign off Sheffield City Council’s £1.whatever billion accounts because of irregularities over Common Purpose invoices.

We would argue that in the case of council tax, it should be possible to us to choose which council services we think valuable enough to contribute towards. Education, police (so long as they are peace officers and not revenue collectors), fire service, bins, roads, swimming pools etc, are areas I would happily contribute my share to. The EU, Common Purpose, dodgy property deals, missing millions of redevelopment and regeneration money, ethnic cleansing (think Devonport or soon North Prospect in Plymouth for example), child trafficking under the guise of child protection, massive salaries and gold-plated pensions are areas I am unwilling to contribute to.

The same general point goes for Income Tax. If we as individuals believe the wars in Iraq and Afghanistan, or the handing of sovereignty to the EU and/or the UN, or any other actions of our government are unlawful, it is, in the view of the BCG, our duty as taxpayers to withhold payment of tax until such times as the government is acting lawfully again.