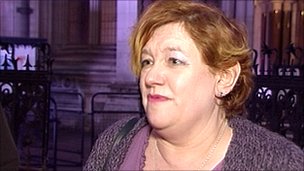 Geraldine Milner campaigned to stop Fluoride in Southampton
UK High Court upholds forced Southampton water fluoridation. Why should 78% of residents who objected be ignored and now be poisoned ?
http://bbc.in/hcmgUd
Geraldine Milner was so incensed when her health authority pushed ahead with plans to put fluoride in Southampton’s tap water despite local opposition she fought the decision in the High Court.
The mother-of-three said she was “livid” when she learnt fluoride was to be added to the city’s drinking water despite a public consultation which showed most people did not want it.
However her claim that South Central Strategic Health Authority (SCSHA) had acted unlawfully by not properly considering residents’ views has now been rejected by the High Court.
She said started the legal challenge because she felt her “basic human right” of clean water was under threat.
“It’s not like I can get water from the local river,” she said. “I don’t have any other alternative.
“They are polluting my only water supply – and it’s already got chlorine in it.”
Such issues are made for political intervention, and needs a powerful political movement.  UKIP should be leading it.
Fluoride is a deadly poison, end of story.   Unlike chlorine, boiling concentrates it.  It is the most powerful of all the halogens, like chlorine, bromine etc – and it leeches all the vital minerals like copper out of the body.   Fluoride is tiny.  It has no smell, and it is transparent in its compounds.  The only element smaller is hydrogen.   Fluoride’s reactivity means it passes easily through the skin. It is impossible to chelate or remove, and it stores up cumulatively over a lifetime, bringing early death, depression and chronic fatigue – not to mention lowering IQ, damaging memory and contributing to cancer by disabling the body’s own ability to defend itself against tumours.


Read this book – The Devil’s Poison – How Fluoride Is Killing You. By Dean Murphy DDS.


Those who study the secret depopulation programme say that Britain has been targeted to have our population reduced to 30 Million.  Fluoride is clearly a part of the campaign, as it is being added to the water supply of more and more cities every year.  Where is UKIP?


http://www.pauapress.com/fluoride/files/1418.pdf
The Tap Blog is a collective of like-minded researchers and writers who’ve joined forces to distribute information and voice opinions avoided by the world’s media.