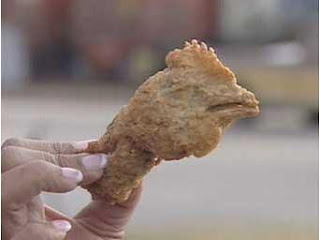 and out of curiosity, I scanned what “Chicken McNuggets” consisted of. To my surprise, the official company document proudly listed the following:
I would strongly advise those who are McDonald’s regulars to carefully review the ingredients contained in their respective menu favorites, if only to be aware of what they’re ordering and ingesting into their bodies.


MORE FROM THE OMNIVORE’S DILEMMA –

“The ingredients listed in the flyer suggest a lot of thought goes into a nugget, that and a lot of corn. Of the thirty-eight ingredients it takes to make a McNugget, I counted thirteen that can be derived from corn: the corn-fed chicken itself; modified cornstarch (to bind the pulverized chicken meat); mono-, tri-, and diglycerides (emulsifiers, which keep the fats and water from separating); dextrose; lecithin (another emulsifier); chicken broth (to restore some of the flavor that processing leeches out); yellow corn flour and more modified cornstarch (for the batter); cornstarch (a filler); vegetable shortening; partially hydrogenated corn oil; and citric acid as a preservative. A couple of other plants take part in the nugget: There’s some wheat in the batter, and on any given day the hydrogenated oil could come from soybeans, canola, or cotton rather than corn, depending on the market price and availability.


According to the handout, McNuggets also contain several completely synthetic ingredients, quasiedible substances that ultimately come not from a corn or soybean field but form a petroleum refinery or chemical plant. These chemicals are what make modern processed food possible, by keeping the organic materials in them from going bad or looking strange after months in the freezer or on the road. Listed first are the “leavening agents”: sodium aluminum phosphate, mono-calcium phosphate, sodium acid pyrophosphate, and calcium lactate. These are antioxidants added to keep the various animal and vegetable fats involved in a nugget from turning rancid. Then there are “anti-foaming agents” like dimethylpolysiloxene, added to the cooking oil to keep the starches from binding to air molecules, so as to produce foam during the fry. The problem is evidently grave enough to warrant adding a toxic chemical to the food: According to the Handbook of Food Additives, dimethylpolysiloxene is a suspected carcinogen and an established mutagen, tumorigen, and reproductive effector; it’s also flammable.


But perhaps the most alarming ingredient in a Chicken McNugget is tertiary butylhydroquinone, or TBHQ, an antioxidant derived from petroleum that is either sprayed directly on the nugget or the inside of the box it comes in to “help preserve freshness.” According to A Consumer’s Dictionary of Food Additives, TBHQ is a form of butane (i.e. lighter fluid) the FDA allows processors to use sparingly in our food: It can comprise no more than 0.02 percent of the oil in a nugget. Which is probably just as well, considering that ingesting a single gram of TBHQ can cause “nausea, vomiting, ringing in the ears, delirium, a sense of suffocation, and collapse.” Ingesting five grams of TBHQ can kill.”


AND THAT’S BEFORE YOU CONSIDER THE FACT THAT GM IS PROBABLY AN INGREDIENT.
The Tap Blog is a collective of like-minded researchers and writers who’ve joined forces to distribute information and voice opinions avoided by the world’s media.