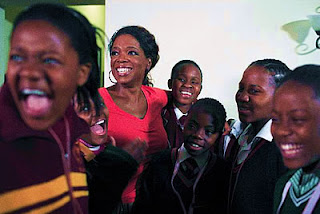 Oprah Winfrey’s got the idea

Bill Gates is fronting the world’s Global Vaccination Initiative.  He claims it will lower the world’s projected population by 1.5 billion people over ten years.  That suggests to me that there is substance in the allegations that vaccines are being used variously to spread disease, and to sterilise people.
No, I am told.  That is not what Bill Gates means.
This comment from David on Conservativehome yesterday argues that
“It’s well proven that lowering infant mortality rates actually leads to lower population growth.”
This reply to David by Ian answers that neatly.
Africa disproves that theory. In the 60’s the population was 200 million. its now over a billion.
When does the fall in child mortality rates begin to have an effect?
Those who have researched the subject for years can tell you that vaccinations have been used to spread disease, and that they have also been used to reduce the fertility of women.  They can also demonstrate that genetically modified foods are being directed to deal with the ‘hunger’ problem.  This they do by producing spermicidal versions of corn and other staple foods, not by increasing output of food.
The way to reduce human population growth is to educate women.  Once women are educated they have more life choices, and they invariably exercise those choices by having less kids.
Those who control the world from behind the scenes don’t like that solution.  They are dumbing down the world’s populations, cutting standards of education, and using mass media to sidetrack people onto low grade entertainment, and other mind-inhibiting interventions such as adding fluoride to water, toothpastes and getting as many IQ-lowering chemicals into drinks and foods as they can.
It makes you wonder what the IQ level of the world’s clandestine rulers must be.  They became powerful by building monopolies through the use of violence and other methods, not from the possession of higher IQ.  Their descendants who have inherited their power, seem worried that others might be more intelligent than they are.  They want to keep the world as dumb as they can so their position is preserved.  The fact that very few people can get the fact that vaccines are being used to kill and to sterilise people shows that the dumbing down is working well.
Here’s where Bill Gates and David Cameron should be spending their billions.
EXTRACT –

My own comments are blocked from Conservativehome.  Tim Montgomerie can’t get it either.  Why don’t supposedly educated people like Tim Montgomerie know what’s going on?  The reason is that people don’t read enough books.
It’s all written out by professional researchers who’ve been warning of American de-population strategies for twenty years and more.
If you don’t read Dr Stan Monteith who realised that Aids was being deliberately sown, then get something less medical and more political to read.  I would recommend ‘Seeds Of Destruction – The Hidden Agenda Of Genetic Manipulation’ by F.William Engdahl.
He writes on pp 52-53.
In 1948 State Department senior planning official George Kennan noted in a Top Secret memorandum to the Secretary Of State –
We have about 50% of the world’s wealth but only 6.3% of its population….In this situation we cannot fail to be the object of envy and resentment.  Our..task..is to ..maintain the position of disparity without detriment to our national security….We need not deceive ourselves that we can afford today the luxury of altruism and benefaction.
Such a steel-cold assessment of the role of the United States, in the 1970s, found receptive ears with Henry Kissinger, a devotee of unsentimental balance of power Realpolitik.  Nixon had also given Kissinger the task of heading a top secret Government task force to examine the relation between population growth in developing nations, and US national security.
The motivation behind the secret task force had come from John D Rockefeller and the Rockefeller Population Council…..Global depopulation and food control were to become US strategic policy under Kissinger.
This was to be the new solution to the threats to US global power and to its continued access to cheap raw materials from the developing world.
In 1975 the National Security Study Memorandum 200, for adopting a world depopulation plan of action, was signed by Gerald Ford making it official US Government Policy.
NSSM200 states – The US strategy should support general activities capable of achieving major breakthroughs in key problems which hinder attainment of fertility control objectives.  For example, the development of more effective, simpler contraceptive methods through bio-medical research will benefit all countries which face the problems of rapid population growth…


The US can help to minimize charges of an imperialist motivation behind its support of population activities by repeatedly asserting that such support derives from a concern with:


Furthermore the US should take steps to convey the message that the control of world population is in the mutual interest of the developed and undeveloped world alike.  Population control was to be called  ‘freedom of choice’ and ‘sustainable development’.


The language had been lifted  from an earlier Report to President Nixon from John D Rockefeller III.


Kissinger noted elsewhere in his report that the population problem was causing 10 million deaths a year.  In short he advocated doubling the death rate to ‘at least 20 million’, in the name of addressing the problem of deaths due to insufficient food.  He stated that food aid should be made an instrument of national power, suggesting the US would ration its food aid to countries that won’t or can’t control their population.


From there the NSSM200 swung into action.  In the 1980s the Brazilian Ministry Of Health began to investigate reports of massive sterilization of Brazilian women.   The investigation had been initiated after information about the secret US National Security Council memorandum on population control objectives was made public in various Brazilian newspapers in 1991.


The Brazilian government was shocked to find that 44% of all Brazilian women aged between 14 and 55 had been permanently sterilized.  Most of the older women had been sterilized when the programme started in the 1970s.  All the agencies had been operating under the aegis of USAID – the US Agency for International Development.


Prior to these events in Brazil, John D Rockefeller III had been experimenting with sterilization programmes beyond the law.  He had made Puerto Rico into a huge laboratory to test his ideas on mass sterilization, beginning in the 1950’s.  By 1965 an estimated 35% of Puerto Rico’s women of child-bearing age had been permanently sterilized, according to a study by the island’s Public Health Dept.


Poor Puerto Rican women were encouraged to give birth in sanitary US-built hospitals where doctors were under orders to sterilize mothers who had given birth to two children.


The book goes on to describe how vaccination and genetically modified foods have been deployed in the furtherance the US government’s strategic aims of reducing the world’s population.


My point is why does no one seem to be able to take in this information?  Are people unable or unwilling to think that they are being fed food which will cut their fertility, or are being vaccinated with viruses etc which could kill them?  The evidence is not hidden.  It’s in books.  It’s on the internet.  It’s been available for years.  Yet even intelligent people like Tim Montgomerie want to blank it.


I’d prefer to discuss the Rockefeller theory and practice of depopulation.  Why should governments be allowed to poison and sterilize people without the consent of the people being affected.  It used to be called genocide.  Now it’s taboo.