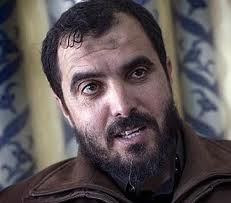 Abdel Hakim al-Hasidi, a former prisoner of the US is
the rebel leader in Libya.  He is an Islamist fighting for a 7th Century Islamic State.

Western Powers and al-Qaeda – On the Same Side

As far back as the mid 90s, a former MI5 agent, David Shayler, testified that British intelligence employed the services of an al-Qaeda cell inside Libya, paying them a large fee to assassinate Muammar Qadhafi. The assassination attempt was carried out. A grenade was lobbed at Qadhafi as he walked among a crowd in his hometown, Sirte. He was saved by one of his bodyguards, who threw herself on the grenade.
Shayler revealed that while he was working on the Libya desk in the mid 90s, British secret service personnel were collaborating with the Libyan Islamic Fighting Group (LIFG), which was connected to one of Osama bin Laden’s trusted lieutenants. The LIFG officially joined al-Qaeda in 2007. On an Islamist website in 2009, Ayman al-Zawahiri welcomed them to the fold.
Over the past two years, the Libyan authorities have released scores of imprisoned Islamists from the LIFG into the custody of their families and communities in a humanitarian attempt to integrate them back into Libyan society. With a pledge that they would use the forums set up in the country, under the auspices of the General People’s Congress, to express their views. Many of the released prisoners had fought in Afghanistan and Iraq and been returned to the Libyan authorities as part of an agreement with the US. If Qadhafi was truly the ruthless man the West would have us believe, then surely these rebels, classified as terrorists by the US, would have remained in prison and their fate very different.
One of those released in 2008 was the LIFG commander, Abdel Hakim al-Hasidi, now one of the leaders of this uprising. Over the last decade, al-Hasidi fought in Afghanistan, was captured in Pakistan in 2002, handed over to the US, and subsequently handed back to the Libyan authorities. In a recent interview with the Italian newspaper, Il Sole 24 Ore, al-Hasidi admitted that, “jihadists who fought in Iraq against the US are on the front lines of the battle against Muammar Qadhafi.”
Libya was the first country to issue an arrest warrant for Osama bin Laden. The Libyan authorities have for years tried to warn the world about the very serious threat posed by these Islamic deviants. According to David Shayler, Western intelligence turned a deaf ear to Libya’s warnings as far back as the mid 90s because they were actually working with the al-Qaeda group inside Libya, to kill Qadhafi, and roll back the Libyan revolution.

The battle being fought in the Libyan desert today dates way back beyond the mid 90s. Today’s battle is essentially a battle between, on the one hand, the revolutionary Islam of Prophet Muhammad, manifest in the writings of Muammar Qadhafi and in the practice of the Libyan revolution. And on the other hand, the reactionary Islam of the Ikhwan al-Muslimeen (Muslim Brotherhood) and their off shoots such as al-Qaeda in the Islamic Maghreb and its affiliate, the Libyan Islamic Fighting Group.
The Muslim revolutionary scholar, Ali Shariati, notes that, “the battle of history is the battle of religion against religion… true religion versus false religion.”
The Islam of the Wahhabist/Salafi sect, adhered to by the LIFQ, is a reactionary interpretation and practice of Islam that seeks to replicate the political and social structures of 7th century Arabian society. Although for the BBC, CNN and Al Jazeera cameras, the rebels are careful to present themselves to the world as a force fighting for ‘liberal democracy’ and to show their love and admiration for the West. Off camera, they are calling for what AQIM has named the ‘Islamic Emirate in the Maghreb’.

Why is the West allying with Islamic terrorists?

When African nations called, Qadhafi answered. He is passionate about the plight of Africans and Africa and longs to see the liberation of the continent and its people. He called on the African Union to give representation to Africans in the Diaspora – the US, Europe, the Caribbean and South America, and acknowledge the need to deal with the conditions of poverty, underdevelopment and marginalisation that continues to confront these communities. At a recent conference held in Libya in January this year, to address the needs and concerns of African migrants to Europe, Qadhafi stated:

“From now on, by the will of God, I will assign teams to search, investigate and liaise with the Africans in Europe and to check their situations… this is my duty and role towards the sons of Africa; I am a soldier for Africa. I am here for you and I work for you; therefore, I will not leave you and I will follow up on your conditions.”

Today, Qadhafi is seen by Africans on the continent and throughout the diaspora as a leading Afrocentric Pan-Africanist, articulating a vision for a United States of Africa – with one government, one currency and one army.
One of Muammar Qadhafi’s most controversial and difficult moves has been his determined drive to unite Africa with a shared vision for the true independence and liberation of the entire continent. He has contributed a great deal of his time, energy and large sums of money to this project, and like Kwame Nkrumah, he has paid a high price.
Many years ago, Qadhafi told a large gathering, which included Libyans and revolutionaries from many parts of the world, that the Black Africans were the true owners of Libya long before the Arab incursion into North Africa. Adding Libyans need to acknowledge and pay tribute to their ancient African roots. He ended by saying, as is proclaimed in his Green Book, “the Black race shall prevail throughout the world.”
‘Brother Leader’, ‘Guide of the Revolution’ and ‘King of Kings’ are some of the titles that have been bestowed on Qadhafi by Africans. Only recently Qadhafi called for the creation of a secretariat of traditional African Chiefs and Kings, with whom he has excellent ties, to co-ordinate efforts to build African unity at the grassroots level. This bottom up approach is widely supported by Pan-Africanists.
While the Libyan revolution has irritated the West since its inception, and although they never forgave Qadhafi for nationalising Libya’s oil, the most worrying move has been his call for the unification of Africa. After years of tireless effort on the part of Qadhafi and the Libyan revolutionary movement, the idea of a United States of Africa is gaining real momentum and support on the continent and amongst Pan-Africanists worldwide.
Global Research


I guess the West will fight with the Islamists just as they did in Afghanistan against the Russians, in the first Libyan war, and then fight against them in the second.  The process to One World Government has consistently involved shifting sides.  The only certainty is warfare, which is one of the ways chosen to stop any countries from becoming overly strong.  Only by keeping all nations suppressed, with war, with debt, with internal rifts,  can national sovereignty be gradually eroded, and ultimately removed, giving way to rule of the world from the United Nations.


Gaddafi has tried playing all sides to maintain his power.   He is no angel.  But as we fight to subjugate Libya, we are hastening the creation of a One World Government which aims finally to subjugate us all.  In effect, we are helping a band of selfish operators no better than Gaddafi to get power over us.  Gaddafi is not our enemy.   Our own government that assists our subjugation by creating a worldwide military supreme power is our enemy.  That power has an agenda and it is not benign.  Give us Gaddafi and the balance of power that keeps peace.  Not the total victory of one gang over all others.  We will be the victims of gangsterhood in perpetuity.
The Tap Blog is a collective of like-minded researchers and writers who’ve joined forces to distribute information and voice opinions avoided by the world’s media.