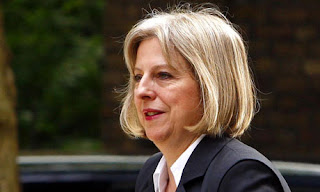 She wants to get the Home Office off the backs of the Police.  How about the rest of us?

Theresa May, the home secretary, is going to deliver a speech on police reform and bureaucracy. As Alan Travis reports, the power to decide whether a suspect is to be charged is to be taken from crown prosecutors and handed back to the police in more than 80% of cases.

Other elements to curb bureaucracy to be detailed today include:
• Exempting trained and experienced officers and staff from going through police performance development reviews that can take up to 10 hours;
• Greater police discretion in handling calls from the public to ensure that the most urgent cases are given priority;
• piloting a new process in domestic violence cases to reduce bureaucracy and paperwork;
• Reducing the number of categories of minor crimes that have to be recorded to save time for officers filling out crime reports;
• Reducing the volume of guidance from the Association of Chief Officers to forces from 600 different directions to fewer than 100.
May is to tell a conference in London on Monday morning: “Last year in my very first speech as home secretary, I offered the police a deal – more freedom to do your work; in exchange for greater accountability to local people.”
She said this package demonstrated she was delivering on the deal:
“We won’t change cultures, attitudes and processes overnight. Getting rid of the paperwork is as hard and grinding a task, as actually filling out the pointless forms in the first place. But I am absolutely determined to see this through,” said May.
Is the tide finally turning?
What about the European Arrest warrant?
What about the Visa shambles, and the arrival in Britain of thousands of illegal immigrants?
Theresa May will be looking good if she can bring common sense to bear on all these areas of injustice, stupidity and wrongdoing.
The Tap Blog is a collective of like-minded researchers and writers who’ve joined forces to distribute information and voice opinions avoided by the world’s media.