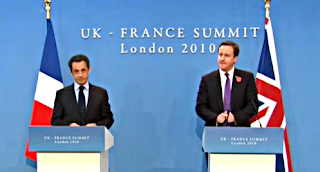 They knew Libya was next, and they both knew their careers depended on its successful launch within NATO.  Sarkozy’s and Cameron’s political opponents are now paying the price.

Can I tell you what this is all about? It’s about the dollar. That’s right. Strauss-Kahn was mounting an attack against the dollar and now the wrath of the Empire has descended on him like ton-of-bricks.  Here’s the scoop from the UK Telegraph:

“Dominique Strauss-Kahn, managing director of the International Monetary Fund, has called for a new world currency that would challenge the dominance of the dollar and protect against future financial instability…..

He suggested adding emerging market countries’ currencies, such as the yuan, to a basket of currencies that the IMF administers could add stability to the global system….Strauss-Kahn saw a greater role for the IMF’s Special Drawing Rights, (SDRs) which is currently composed of the dollar, sterling, euro and yen, over time but said it will take a great deal of international cooperation to make that work.” (“International Monetary Fund director Dominique Strauss-Kahn calls for new world currency”, UK Telegraph)

So, Strauss-Kahn finds himself in the same crowd as Saddam Hussein and Libyan leader Muammar Gaddafi, right? You may recall that Saddam switched  from dollars to euros about a year before the war. 12 months later Iraq was invaded, Saddam was hanged, and the dollar was restored to power.  Gaddafi made a similar mistake when “he initiated a movement to refuse the dollar and the euro, and called on Arab and African nations to use a new currency instead, the gold dinar.” (“Libya: All About Oil, or All About Central Banking?” Ellen Brown, Op-Ed News)  Libya has since come under attack by US and NATO forces which have armed a motley group of dissidents, malcontents and terrorists to depose Gaddafi and reimpose dollar hegemony.

And now it’s Strauss-Kahn’s turn to get torn to shreds. And for good reason. After all, DSK actually poses a much greater threat to the dollar than either Saddam or Gaddafi because he’s in the perfect position to shape policy and to persuade foreign heads of state that replacing the dollar is in their best interests. And that is precisely what he was doing; badmouthing the buck. Only he was too dense to figure out that the dollar is the US Mafia’s mealticket, the main way that shifty banksters and corporate scalawags extort tribute from the poorest people on earth. Strauss-Kahn was rocking the boat, and now he’s going to pay.

Here’s a clip from CNN Money:

“The International Monetary Fund issued a report Thursday on a possible replacement for the dollar as the world’s reserve currency.

The IMF said Special Drawing Rights, or SDRs, could help stabilize the global financial system….SDRs represent potential claims on the currencies of IMF members…..The IMF typically lends countries funds denominated in SDRs. While they are not a tangible currency, some economists argue that SDRs could be used as a less volatile alternative to the U.S. dollar.

“Over time, there may also be a role for the SDR to contribute to a more stable international monetary system,” he said.

The goal is to have a reserve asset for central banks that better reflects the global economy since the dollar is vulnerable to swings in the domestic economy and changes in U.S. policy.

In addition to serving as a reserve currency, the IMF also proposed creating SDR-denominated bonds, which could reduce central banks’ dependence on U.S. Treasuries. The Fund also suggested that certain assets, such as oil and gold, which are traded in U.S. dollars, could be priced using SDRs.” (“IMF discusses dollar alternative”, CNN Money)

Wow. So DSK was zeroing in on US Treasuries as well as the dollar? That’s the whole shooting match.

Global Research – was Strauss Kahn trying to torpedo the dollar?


I doubt DSK would have gone as far as to push for a new world currency all on his own.  He must have believed he had the support of the banksters and their elites to do such a thing.  The collapsing Euro must be giving them all second thoughts.


The Euro was intended to be 40%of the SDR.  In view of the collapse of British independence and Britain’s selling-out by Cameron, the elites suddenly see that the EU, with its role to play in sublimating Europe, is no longer needed.


NATO is holding together with Sarkozy and Cameron leading its charge.  Why bother with the Euro, the SDR and all that baggage any longer?  DSK is a threat to Sarkozy and would have held out for a less US-centric OWG.  When they cast out a player, they cast them out in a way which encourages the others to cave in and play along.  Sarkozy and Cameron will sell out all they need.   Any opposition to either will be dealt with.


In Britain, Clegg and Miliband have developed media misadventuritis, as surely as Cameron now walks on water.  Sarkozy will be built up as the new Napoleon, and two new European dictatorships will be created, all sold out to the power elites of the OWG, of course, just like dictators in third world countries.  For them it’s a win-win situation.  For the rest of humanity, as with DSK, it’s lose, lose, as power rushes to a single central focal point.