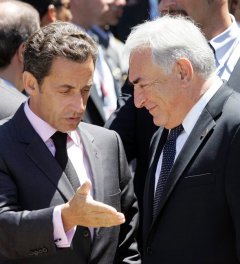 Ambitious Sarkozy Wants DSK Out Of The Running

From 2008 article       Mr. Dominique Strauss-Kahn, Managing Director of the International Monetary Fund (IMF) praised Libya’s efforts to introduce economic reforms saying his discussions with Libyan officials convinced him that Libya is making progress in its reform agenda, with the goal of realizing even higher growth and improving the standard of living among its people.

It seems that his liking for Gaddafi might be why they honey-trapped him today.  He would not have been difficult to honeytrap as this extract from The First Post indicates.  The intention to frame him as womaniser was already in progress before today’s ‘events’ took place.


The OWG wants war-supporting Sarkozy to carry on.


The Frenchman who heads the International Monetary Fund, Dominique Strauss-Kahn, finds himself not only at the centre of the effort to save Greece and the euro – but also mired in a sex scandal. An anonymous Frenchwoman has begun promoting a book which accuses him of being an obsessive womaniser.

“Like all great political animals, he has trouble controlling himself,” says the writer, who has produced Les secrets d’un présidentiable(Secrets of a Presidential Contender) under the pseudonym,Cassandre. She describes Strauss-Kahn – or DSK as the high-profile Socialist politician is known to the French media – as “always on the hunt”.
When he enters a room, whether a café and office or a private place, the ritual is always the same, she says. He surveys the room for attractive women and having spotted his prey, bombards them with text messages, usually with the opener: “I want you”.
“He is direct and makes no concessions,” says Cassandre.


How does he know these women’s mobile phone numbers, you might ask, if they are total strangers?

More of the report about Strauss Kahn and Libya’s economy –


Mr. Strauss-Kahn held talks with the Leader of the Revolution Muammar Al-Qathafi during which they both discussed the current world financial crisis. Gaddafi told the IMF top official that the real cause of the global financial crisis was an ideological one represented in the monopoly by the few of the wealth in the capitalist societies.

Al-Qathafi informed the IMF’s Managing Director that temporary solutions to the crisis were useless and that only through redistribution of wealth amongst all citizens that the crisis can be solved.

According to the Libyan new agency JANA, Mr. Strauss-Kahn expressed his agreement with Gaddafi’s view that the main cause of the global financial crisis was ideological stressing that recovery from it would not be achieved in the short term and that the crisis would lead into a global economic downturn.

At the conclusion of his visit to Libya Mr. Strauss-Kahn issued the following statement:

“It has been a great pleasure to participate in the conference on Progress in Regional Integration and Promotion of Joint Ventures in the Maghreb and exchange views with finance ministers, central bank governors, the Secretary General of the Arab Maghreb Union, and private sector representatives. I want to thank the Libyan authorities for superbly hosting this conference.

“I praised the Tripoli Conference participants for adopting an action plan to accelerate reforms in trade facilitation, financial integration, and the promotion of the private sector and joint ventures. They have agreed to review the progress in the implementation of this action plan in the 2009 Spring and Annual Meetings of the IMF and the World Bank.

“I was also privileged to meet the Leader of Libya, Colonel Gaddafi, the Secretary of the General People’s Committee for Finance, Mr. El-Huweij, and the Governor of the Central Bank, Mr. Bengdara.

“Our discussions confirmed that we share many views on Libya’s economic achievements and key challenges. Ambitious reforms over the past years have yielded strong and increasingly broad-based growth and macroeconomic stability. The key challenge is to sustain the ongoing reforms, including reducing the size of the government.


The media has to find a way to make Gaddafi seem like an impossible ogre to justify killing him and his relatives.  It’s pure extra-judicial murder and theft of a sovereign nation’s assets, and Strauss Kahn knows that to be true.  He has to be discredited.


Strauss Kahn knew he could be honeytrapped.

Very strange.
Three weeks ago, Dominique Strauss Kahn said he could see himself becoming victim of a sex trap.
In an interview with Liberation, a French publication, on April 28, he said he foresaw 3 main challenges ahead for him (the implied thing being, if he ran for President of France).
“The money, women and my Jewishness.”
He said the challenges were “in that order,” but he spoke about the big one first: Women.
“Yes, I love women … so what? […] For years we talk about giant pictures of orgies,” he told Liberation. “But I’ve never seen anything out … Let show them!”
Then he said he could see himself being set up because of his affinity for women. According to Liberation:
DSK then talks about ending up in a men’s room with Sarkozy, during an international summit, and asks him to stop the dirty tricks about his private life.
Wanting to pose as a victim, DSK starts imagining “a woman (he might have) raped in a parking lot and to whom half a million or a million euros would be promised to make up such a story…”
The Tap Blog is a collective of like-minded researchers and writers who’ve joined forces to distribute information and voice opinions avoided by the world’s media.

One Response to “Strauss Kahn Had Praised Libyan Economic Performance.”