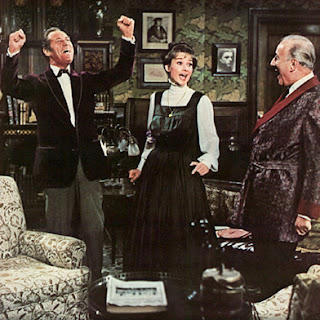 What Is It About Debt And Waste That Brings Out The Music?
Henry Higgins, Eliza Doolittle and Colonel Pickering in My Fair Lady

Click through to James Mackintosh. He’s talking about The Pain In Spain Falling Mainly On The Euro…

Farage is singing too, there’s a hole in my bucket……

..methinks he noticed the biggest cheer at his ‘Rally Against Debt’ speech was to his cry of ‘no more bail-outs‘.

I remember my own vocal chords were activated at that point in his speech.

If politics can be reduced to four words, it usually works so much better.


There’s a hole in my bucket , though has got six…..it might appeal to voters, but so might something else, either funnier, or stronger.  Most people are not laughing about debt.  They’re fuming, and don’t need humour.  Maybe a few swear words might be more appropriate.

And where are the girls, Nigel?  Debt is a topic which gets the girls going, whereas sovereignty and nationality can be very male.  Much as the below line-up could set any female heart on fire, why not get the girls chanting and singing as well?

Mention the PIIGS.  It’s not a new acronym among politicos but is not well known amongst the general public.  Or have a go at banksters reaping profits from all the misery.  Osborne’s friends – Rothschilds, Rockefellers.  People have no idea that these characters even exist.  They like debt.