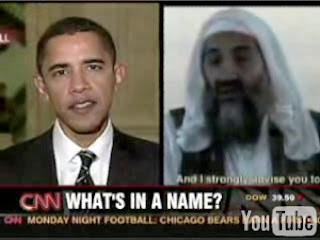 Would Obama have become President Of The US without his name being similar to the greatest terror myth of the era?  Will falsifying Osama’a death now bring Obama to an end as well?  Just look at that ruddy nose on the OBL lookalike!

“The great enemy of the truth is very often not the lie — deliberate, contrived and dishonest — but the myth — persistent, persuasive, and unrealistic.” – JFK


For those whose understanding of the world is derived from what their governments and political leaders tell them to believe, and from the mainstream media which regurgitates the government’s views and ideology, the world is black and white.


For these people: the economic crisis is over.  We are now in a “recovery”.
The ‘War on Terror’ is an age-old battle between the forces of good and evil.  It is retribution for the attacks of 9/11. It is designed to battle ‘terrorism’ in every corner of the world.


The era of imperialism ended with World War II.  America is not an ’empire’, but rather a bastion for freedom which spreads democracy around the world.


The war against Libya was intended to save innocent lives out of ‘humanitarian’ concerns.

We must accept the loss and restriction of our fundamental rights and liberties in order to protect us from terrorists.

Barack Obama has brought ‘change’ and is a beacon of ‘hope’.

The death of Osama bin Laden shows that the ‘War on Terror’ is working, and is worthy of going out in the streets to celebrate and cheer!

For these people… the world is based upon a pervasive, unyielding myth, building illusions for all to see and believe.

At Global Research, we strive to tear down these myths, expose the illusions, and reveal the magicians in the background.

In reputational terms, they ‘lived a lot together, and finally together they died.’