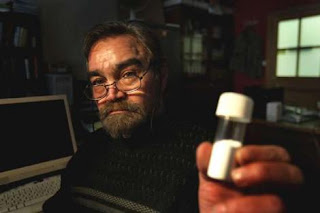 Thorium Oxide?  That’ll Do It A Lot Cheaper And Safer.


Think you could do a blog on nuclear power?. Let me explain. A few weeks ago I watched a video given by Nick Griffin to the European Parliament in which he castigated the MEP’s for wanting to squander billions on virtually useless wind turbines and then went on, asking why no one was pursuing thorium nuclear power. I’d never heard of this.

Lo and behold, three days ago  I received my copy of the newspaper “UK Column”,issue no.2, from Lawful Rebellion, and the whole of page 4 was dedicated to this very subject.


There is even a cutaway drawing of a SSTAR ( Small, Sealed, Transportable, Autonomous reactor) that will be available as a 500 ton 100 MegaWatt version or a 200 ton 10 MegaWatt version.  The full page is too much to show here, but if I may condense one chapter:

“When nuclear power was first thought about, there were two parallel strands of research. One was the use of Uranium as a nuclear fuel, the other was the use of Thorium. Uranium won that battle, and reasons are simple – because Uranium is scarce, and the elites (Rothschild) control the mining companies. Thorium is plentiful, widely distributed,(even in the sea). Most important for the elites, Uranium is weaponisable, Thorium isn’t.”

There is lots more, and I strongly recommend that you send for a copy of the paper. From your vantage point of The Tap, you could do far more than I, to validate any of  these claims and give the publicity it perhaps needs.
Keep up the good work.

In light of recent environmental disasters in the name of energy, staggering military expenditures, and a growing demand for energy across the globe, the energy outlook is not good.
The United States is considering building the first nuclear reactors since the 1970’s. Demand is high, considering a nuclear reactors efficiency; Reactors provide an amazing amount of energy, yet are terrifying.
A massive security liability and far from renewable, as the toxic waste that is created must be stored for thousands of years, waste so deadly nobody wants storage facilities or reactors built anywhere nearby.
What if there was a better answer? What if there was an element other than Uranium that could promise zero chance of meltdown, generated power cheaply, could not be weaponized, and who’s reactive waste only had to be stored for a few hundred years, rather than tens of thousands?
Enter Thorium.
The Tap Blog is a collective of like-minded researchers and writers who’ve joined forces to distribute information and voice opinions avoided by the world’s media.

3 Responses to “Nuclear Power. Why Use Uranium?”