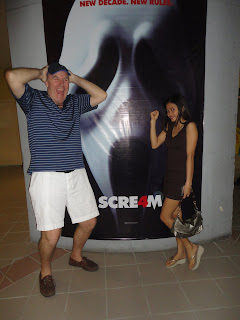 A fortnight ago, before I left.  All smiles.
Shane, my girlfriend went to Manila airport this morning, and despite having a full visa in her passport, she was stopped from going on board the flight.  How come?
This, she was told, was because she didn’t have a copy of my Philippine Residence Visa, which is not normally a requirement for someone departing – to have someone else’s papers.  And because not unnaturally she wasn’t carrying my ID details, they wouldn’t allow her to board her plane.
I don’t profess to know all about internal Filipino procedures, but how can airlines like KLM operate when even a valid UK entry visa is not sufficient to get past immigration in the country of departure?
From here in the UK, it all seems highly bizarre.  I would be worried about the reputation of a country that doesn’t appear to operate a sensible system of document processing.  Maybe I’m wrong.  She will try and board another flight tomorrow.  Maybe an Immigration Official made a mistake.  I do hope so.  She will appear at the airport with all the requested documentation tomorrow morning and try again.
The Immigration Official who refused Shane’s entry to the flight is called ‘redacted on request’.  We are not saying corruption is relevant in our case, though we know of other cases where £800 was paid to get a wife the right to leave the country, whose exit was entirely legal in all other respects.  It sounds like a situation in need of a bit of attention.
The Tap Blog is a collective of like-minded researchers and writers who’ve joined forces to distribute information and voice opinions avoided by the world’s media.

18 Responses to “Why Is Philippine Immigration Holding Shane?”