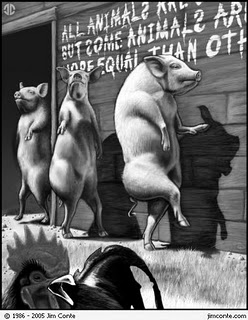 All animals are equal, but some are more equal than others.. (Animal Farm by George Orwell)

The following are extracts from Strategic Concept: For the Defence and Security of the Members of the North Atlantic Treaty Organisation, endorsed at the NATO summit late last November:

“The citizens of our countries rely on NATO to defend Allied nations, to deploy robust military forces where and when required for our security, and to help promote common security with our partners around the globe.”

“NATO has a unique and robust set of political and military capabilities to address the full spectrum of crises – before, during and after conflicts. NATO will actively employ an appropriate mix of those political and military tools to help manage developing crises that have the potential to affect Alliance security, before they escalate into conflicts; to stop ongoing conflicts where they affect Alliance security; and to help consolidate stability in post-conflict situations where that contributes to Euro-Atlantic security.”

The new Strategic Concept calls for plans to “develop and maintain robust, mobile and deployable conventional forces to carry out both our Article 5 responsibilities and the Alliance’s expeditionary operations, including with the NATO Response Force” and to “develop the capacity to contribute to energy security.”

“Crises and conflicts beyond NATO’s borders can pose a direct threat to the security of Alliance territory and populations. NATO will therefore engage, where possible and when necessary, to prevent crises, manage crises, stabilize post-conflict situations and support reconstruction. Where conflict prevention proves unsuccessful, NATO will be prepared and capable to manage ongoing hostilities.”

“Unique in history, NATO is a security Alliance that fields military forces able to operate together in any environment; that can control operations anywhere through its integrated military command structure; and that has at its disposal core capabilities that few Allies could afford individually.”

After launching a full-scale war against a European nation for the first time since the end of World War II in Yugoslavia in 1999 and joining the U.S. in Afghanistan two years later in what is now the longest war in the world, NATO is putting its new global military doctrine into brutal and deadly effect in Africa.


Political language… is designed to make lies sound truthful and murder respectable, and to give an appearance of solidity to pure wind.