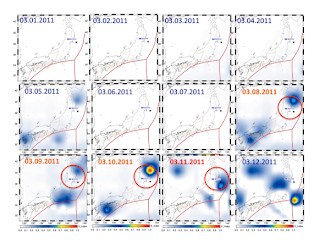 Atmospheric rings of heat show up in days before Tohoku earthquake.
Click image to expand.

I’m still house-moving with limited access to net.  Comments are arriving from ME and from an anonymous from Japan in Japanese, stating that the atmosphere was heated prior to the Japanese earthquake, lending yet more evidence that HAARP played a major part in the tragedy unfolding.

Infrared emissions above the epicenter increased dramatically in the days before the devastating earthquake in Japan, say scientists//


DIARY
We’ve been shopping for all you need to live this morning – tables, chairs, towels, knives, plates…..  It will be Tuesday at least before there is an internet link – unless I can wi-fi with the neighbours!  I might try asking them.  You never know.  Could save a few quid and a lot of bother.  BT are not my favourite organisation on the planet.


Last week I heard rumours of a hurricane in Ireland.  Anyone see any square clouds the day beforehand?  OR rings on the weather maps?  The weather attack seems to be ongoing, with somewhere on the planet affected each week.


Blog traffic held up well this week despite little net access and few blog posts.  Month is at 37,000 page downloads currently, up from 30,000 at end of April 2011, and from 10,000 a month at June 2010.  The ‘weather’ is clearly still interesting people, and  I see the story about spermicidal cornflakes manufactured from Genetically Modified corn, directly targeting the human reproductive system, is getting more clicks.


I was asked today, face-to-face,  by a reader about the tetanus vaccine being used to deliberately cause stillbirth/miscarriage, by suppressing female pregnancy hormones, which I blogged last week.  Shane typed out a section from the book Seeds of Destruction by William Engdahl for me,in which he explained how the tetanus vaccine was covertly targeted to deliberately suppress female pregnancy hormone in some Third World countries.  I hope Engdahl will forgive this small breach of copyright. People really need to know about the potential hazards they face as they receive certain vaccines.  Medicines like foods are being used as weapons, as well as the weather and plate tectonics.


Keep writing in, commenters.  Thanks for the links.

The standard-bearers of Anglo-American imperialism in the current epoch, President Barack Obama and Prime Minister David Cameron, met in London on May 25 to discuss the world’s two ongoing wars of aggression, those in Afghanistan and Libya, both under the command of the North Atlantic Treaty Organization dominated by Washington and London.

As well as joining a barbecue for American and British troops in the prime minister’s haunts, in the gardens of Number 10 Downing Street, the two potentates called for continuing to bomb Libya back to the Paleolithic Age.

Displaying what passes for sophisticated humor in the contemporary deadened age, Cameron told the press, “It was…probably the first time in history, as we stood behind that barbecue, that I can say a British prime minister has given an American president a bit of a grilling.”

Correspondents chuckled as Libyan, Afghan and Pakistani civilians writhe in their death throes from the bombs and Hellfire missiles delivered by Cameron’s and Obama’s warplanes.

Waxing as reflective as he is capable of doing, the British prime minister added: “Barack and I came of age in the 1980s and ’90s. We saw the end of the Cold War and the victory over communism. We saw the invasion of Kuwait by Saddam Hussein and the world coming together to liberate that country. Throughout it all, we saw presidents and prime ministers standing together for freedom.”

Standing shoulder-to-shoulder in triumphalism and unbridled militarism, more like.

British, French, Italian, Danish, Dutch, Norwegian, Qatari and United Arab Emirate warplanes have flown over 8,000 sorties and more than 3,000 combat missions against Libya since NATO took control of the war on March 31, before which the U.S. and Britain fired at least 160 cruise missiles into the nation. Hours before Cameron and Obama enjoyed their barbecue, NATO warplanes launched a one-hour bombardment of the Libyan capital of Tripoli, the most ferocious attack in more than two months, killing 19 people and injuring over 130 others.