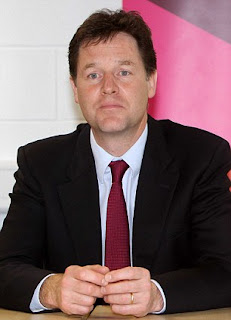 Farron’s friend, Nick Clegg, former purveyor of false referendum promises
No one in the right mind will believe a referendum promise from any of the main parties
They either hold one or they don’t.  Promises are dead.

Tim Farron, a possible future leader of the Lib Dems says that Britain’s relationship with the EU is getting so poisonous, that our commitment needs re-affirming with a referendum.  He would campaign for staying in, he emphasises, but he thinks it is essential that the issue is resolved.


We’ve heard these promises from Liberal Democrats before, and been badly let down with multiple deceptions from Nick Clegg.  Why would Farron be any different?  He is a man of his word, he insists.


As more Euro bailouts beckon, the popularity of the EU amongst the British will be hitting an all-time low.  There will be good votes to be won by representing this dissatisfaction, which is why UKIP has surged to 7% from 3% in five months.  The Lib Dems no doubt want some of this action, but the truth is they have no credibility.


The only way they can win back some is to push their COnservative Coalition partners into a referendum vote before the election.  If they mean they want a vote afterwards, no one will believe a word they say.

He said: “What’s so refreshing about Tim’s honesty is that he recognises it’s for all the people of Britain to decide and not just those in Westminster.

“Tim is the latest MP of all parties to join our campaign to have a referendum. It’s now becoming unstoppable. It’s exciting.

“The great thing about the AV referendum was that it showed us all how easy it is to have one.
“The genie is now out of the bottle.”

In his interview with the Sunday Express, Mr Farron, 40, a proud northerner who is MP for Westmorland and Lonsdale, said he was a man of his word.

In 2008, rather than break a promise to constituents, he defied the party whip and resigned from the Lib Dem front bench to vote in favour of a referendum on the Lisbon Treaty during a Commons debate.

His loyalty was rewarded two years later when he massively increased his majority in Cumbria, taking 60 per cent of the vote.

He again kept his principles by voting against the hike in university tuition fees last November.

Although seen as ambitious, Mr Farron, a married father of four, said he would reject any offer of ministerial job, or even a quasi-Government role such as the once accepted by party deputy leader Simon Hughes.

“I would turn an offer down,” he said. “As party president, my job is to be a critical friend of the coalition, but not to be chippy about it all.

“The danger is that we start to assert our independence we might start to sound chippy.
“We must not do that; we’ve just got to be robust and muscular.”

A close friend of the Deputy Prime Minister – the two shared a “very enjoyable evening” at Mr Clegg’s home in Putney, southwest London last Tuesday – he is being talked up as a likely leadership successor, particularly with scandal surrounding Energy Secretary Chris Huhne.


It has to be said  – Any friend of Clegg is an enemy of mine.

3 Responses to “Lib Dem Liars Try Offering IN/OUT Referendum On The EU All Over Again. Yawn.”