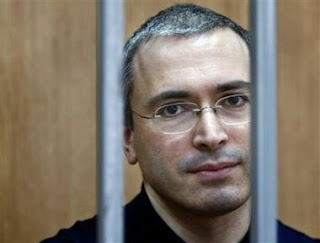 Mikhail Khodorkovsky
I decided to read a bit more of Benjamin Fulford this morning, and read his rense.com article.  The whole piece is interesting, but this part stood out –

When Putin kicked out Nieslev and Bereshovsky and arrested Khordokovsky, he basically kicked the Rockefellers and Rothschilds out of Russia. I have good Russian sources, and am confident Putin is a nationalist who is fighting the Illuminati with all his might. When ex-NSA chief Bobby Inman spoke at the Foreign Correspondent’s Club of Japan on June 26th he made it very clear he expected a protracted struggle with Russia.

“India kicked them out in Ghandi’s day and they have never been allowed back. Having liberated themselves after 300 years of Illuminati (East India Company) rule, they do not intend to let themselves fall under their control again. (I wonder)

“There have been many attempts by the Illuminati to infiltrate and dominate China. They financed Chairman Mao but he then kicked them out in the 1960’s (that is why China and the USSR nearly went to war then). They are now trying to create a financial crisis in China that would open the way for them to infiltrate the Chinese financial system. They will not succeed.

Fulford also mentions a tension between the Global Warming depopulation branch of the One World Government, and the War On Terror branch, the Bush brigade.

The depopulation programme is what’s bothering China and Japan, where Fulford lives, as it is a racist programme as well as an environmental one.  He speaks of a large Chinese/Japanese secret society which has threatened the Illuminati members with assassination, if they proceed with their depopulation plans.  He claims the OWG has assassinated up to 200 Japanese politicians since the second world war.

That said, the population of Russia is tumbling, no doubt at the hands of USAID which runs the Russian ‘health’ service.

The latest tsunami to strike Japan is thought by Fulford to be a deliberate attack by the Americans, as Japan had been threatened with earthquake weapons.  If this attack went in, as he claims, surely that should be triggering countermeasures against the Illuminati.

Fulford sounds as if he means business.  So far there is no real world evidence of any fightback against the One World Government.  Sometimes you wonder if Fulford is another Icke, a voice of opposition that bears no fruit, but discredits other potential oppositions.  If anything the attack on Japan, if real, shows a total disregard for the threats being made by Fulford.

Russia’s Foreign Ministry had this to say about NATO’s attack killing relations of Gaddafi including grandchildren, and killing his household members –


The intensification of strikes in Tripoli led to Russian Foreign Minister warning that “The no-fly zone does not stipulate hitting ground targets” and “The resolution [UN Security Council Resolution 1973] does not stipulate targeting civilian targets or targets not related to the military.” The Chinese foreign ministry issued similar concerns on the day of the attack.

The following day Russian Prime Minister Vladimir Putin stated: “[W]hen the whole of so-called civilized society gangs up on one small country, destroying infrastructure that has been built over generations, is it good or bad? Personally I do not like it….What kind of no-fly zone is this if they are striking palaces every night?”

As to the true intentions behind the West’s war against Libya, he added: “Libya has the biggest oil resources in Africa and the fourth largest gas resources. It raises the question: isn’t that the main object of interest to those operating there?”

7 Responses to “Did Putin Kick Out The Illuminati? What’s The Endgame?”