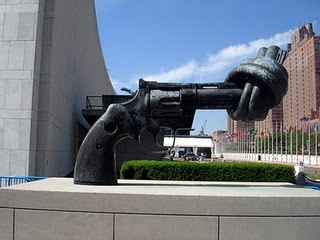 The UN New York.  It reminds you of Arbeit Macht Frei.  There have been nothing but wars since 2001, all approved by the UN’s Humanitarian War policies.

The world’s single government is the United Nations.  The United Nations rules Britain not through Westminster, or Brussels, but through Common Purpose, which has already been infiltrated into our Civil Service at all levels.  David Cameron attends their conferences.  There is a cohesive secret government running Britain, controlling our lives unseen, or at least, unmentioned in the media.

This week the EU grabbed the right to represent all the 27 nations of Europe at the United Nations, which will in time override the right to be represented by each nation individually, including Britain.

We will have no control whatsoever through our democratic system over the decisions taken by our UN One World Government.  It will be a totalitarian state.  It is coming into being, with, for example, Cameron and Sarkozy taking their orders from somewhere, and working in tandem to make war on otherwise peaceful nations like Libya.  Our nations are already finished as effective political entities.

The only thing left is for the world’s new effective single government at the United Nations to declare itself.  But while they can keep the world deluded that their nations still exist as political entities, they will leave them in this self-deception, or rather media-maintained deception.

This article from The Daily Express tells the story, but fails to put across the whole picture and explain what this will mean….The United Nations Agenda For The 21st Century, supported by Prince Charles, will be imposed without choice from above.

Charles is an agitator on behalf of the United Nations’ Agenda 21 and Habitat 2 programmes, which are bringing in worldwide communism, the end of the nation state, the end of private property and the collectivisation of humanity, not to mention a vast culling of our numbers.  See The Sustainable Prince by the late Joan Veon.  Agenda 21 is the United Nations’ Agenda for the 21st Century, which 99.9% of humanity has never heard of.  Children will be reoved from their families and be brought up by the State.

Would you be happy for your children to ‘volunteer’ to be sterilised, for example?  That’s coming, and is included in Agenda 21.  There will be no chance for Britain to even complain.  We are cut off from the democratic process, a process which is almost non-existent as it is.

THE EU has seized the right to speak at the United Nations on behalf of its 27 member states, prompting fears that Britain may eventually lose its seat altogether.
In the latest Brussels power grab the EU will be able to address UN meetings through its own officials, rather than the country holding its rotating presidency.
The decision, which does not give the EU voting rights, comes after years of lobbying by the European bloc.
Baroness Ashton, the EU’s High Representative for Foreign Affairs and Security Policy, told the UN’s General Assembly they would now hear “a clearer voice” from the EU.
But the move has sparked fears that the UK will eventually lose its seat at the UN table.
Ukip leader Nigel Farage said: “This is the next step along the road to Britain being deprived of its permanent seat and its voice at the UN Security Council.

To get an idea of how undemocratic the UN is, here is a description of its processes given by a delegate from Botswana being inducted in December 2010 –

Today we had a meeting with the Model UN team. It was the last one we will have before the Christmas break, because the finals are approaching! It was a great meeting not only because of the pizza but also because we got to know in detail how we are going to be organized. We are very lucky that we will have Dr. Weinstein guiding our work during the whole process, because he is an expert on the Model UN.
The most important thing we learnt today is that we have to be divided into different committees. Each of them will deal with different topics (if I’m not wrong, there are about three topics on each category), so now we have some weeks to do some individual research and see what committee fits each one the most. As I already mentioned in a previous post, we are representing Botswana, which has six different committees.  Let’s see what are these:

Since the country is pretty small, we don’t really participate in small committees. The four first ones are actually very big. A general assembly might have over 90 countries participating at the same time. Which means that the countries that want to talk will have around 45 seconds to do so! This is when you realize how concise you have to be. We will definitely need to learn how to say everything we need to say in such short time. The big assemblies are also harder to follow. According to Dr. Weinstein, we might even spend a couple of hours only deciding what topic should we debate first!
He also warned us that we will have some frustration during the 5 days of the Model UN in April, which I can actually imagine. As a contrast, in the smaller committees (like the last two I wrote) the delegates have more chances to speak and debate. One thing that we need to learn is how to avoid “I believe”. In the debates there is no “I” anymore. We are talking on behalf of a country, so no one cares what we actually think (even if it sounds hard). I can imagine this is going to be a bit difficult to handle when you are nervous, but we have to change “I think” into “my country…” if we want to do a good job.
And we thought the EU was bad…..


The UN is controlled  by Maurice Strong.  Ever heard of him?  Search his name here or on the net.

One Response to “European Democracy Has Gone”